A photo collage has been shared thousands of times in multiple posts on Facebook and Instagram alongside a claim it shows an accurate comparison between the skyline in Thailand under the prime ministership of Prayut Chan-O-cha and his predecessor Thaksin Shinawatra. The claim is false; both photos actually show Singapore.

The image was published here on Facebook on September 9, 2020, on an imposter account of Thai royalist group Thai Pakdee. It has been shared more than 7,400 times. 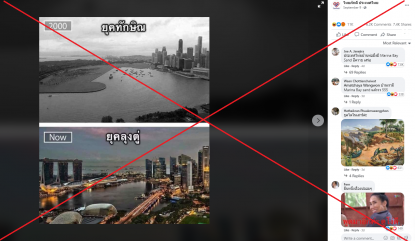 Another said: “But during Thaksin’s time, even people who sold limes were rich, but in Prayut's era everybody is poor.”

A reverse image search on Google found the same set of photos published here in an article on boredpanda, a Lithuania-based online magazine.

The article, published on June 29, 2016, is headlined: “31 Before-And-After Pics Showing How Famous Cities Changed Over Time”. 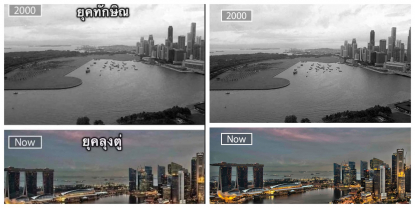 Closer examination of the photos in the misleading posts revealed they show Singapore's Marina Bay.

Marina Bay Sands, a luxury hotel resort in Singapore’s Downtown Core district, can be seen in the second photo.

Below is a screenshot comparison of the the building in the second photo in the misleading posts (L) and a photo of Marina Bay Sands resort on the Singapore government website (R), with the building circled in red by AFP:

The same location can be seen here on Google Maps.