These photos actually show suspects in the death of an Indonesian man in October 2019, police say

A series of pictures showing four men have been shared tens of thousands of times in multiple posts on Facebook with a claim that they had robbed, raped or killed people in different parts of Malaysia while pretending to sell soap. The claim is false; Malaysian police said the images actually show suspects in the death of an Indonesian man in Sarawak state in October 2019.

The photos show four men standing in front of a blue background. 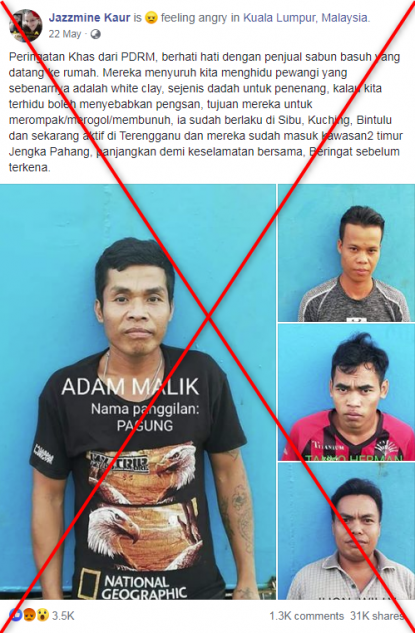 The post's Malay-language caption translates to English as: “A Special Reminder from PDRM, be careful of soap sellers who come to your home. They tell us to smell the perfume that is actually white clay, a type of sedative drug, if we smell it will cause us to faint, their intention is to rob/rape/kill, it has already happened in Sibu, Kuching, Bintulu and is now active in Terengganu and they have already entered the eastern areas of Jengka Pahang, spread this for everyone’s safety, Remember before you are targeted.”

Sibu, Kuching and Bintulu are cities in the state of Sarawak, on the Malaysia part of Borneo. Terengganu is a state and Jengka Pahang is a town, both located in Peninsular Malaysia.

The images were also shared here, here and here on Facebook, alongside an identical claim.

A keyword search on Google found a similar claim has circulated online since at least 2013. The earlier versions of the same claim did not include the images of the men.

In response to the misleading posts, Malaysian police’s corporate communications department told AFP by email on July 28, 2020 that the claim was false.

Translated from Malaysian language, the email says: “For your information, a review was conducted and (we) found that the content of the message ‘be careful of the sale of soap’ had gone viral before this and the Royal Malaysia Police (PDRM) had uploaded the denial of the message through PDRM’s Official Facebook on November 18, 2014.

“Besides that, the Head of the Department of Criminal Investigation from the Terengganu Contingent also issued a statement through the Sinar Harian portal about the message on November 3, 2019.

“A check with the authorities from the Media Center of the Sarawak Contingent Police Headquarters found that the pictures of the suspects mentioned in the message, were actually suspects suspected to be involved in the discovery of the body of an Indonesian man on October 14, 2019 in Sibu, Sarawak.”

Sinar Harian is a Malaysian-language newspaper.

On November 3, 2019, it published a report headlined: “Police deny active acts of robbery, rape and murder in Terengganu,” with a blurred photo of the men seen in the misleading post.

Below is a screenshot of the Sinar Harian report: 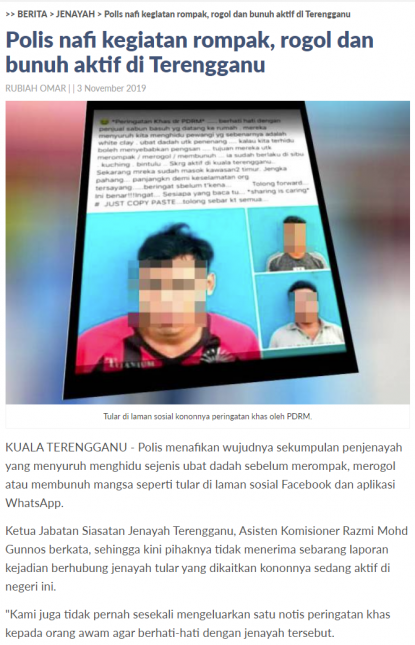 Screenshot of the Sinar Harian report

A similar claim was previously reported by The Borneo Post, a newspaper based in Kuching, on March 27, 2013, here, saying that Malaysian police “have not received any reports about criminal acts using a type of sedative drug to attack victims”.