Two images that show an elderly man and woman holding hands across parallel hospital beds have been shared hundreds of times in multiple Facebook and Twitter posts which claim they are an elderly Chinese couple who were infected with the novel coronavirus. The claim is misleading; the images have previously circulated in reports which stated they were an elderly Chinese couple suffering from health problems unrelated to the novel coronavirus.

It has been retweeted 56 times and liked 255 times. 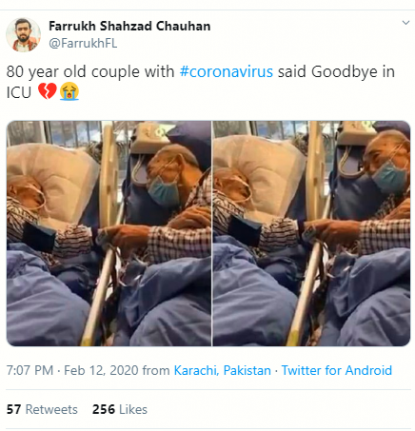 The novel coronavirus has killed more than 2,500 people in China and infected more than 80,000 people globally, though China remains by far the worst hit, as reported here and here by AFP.

The same photos of the elderly couple were also shared on Facebook here and here with a similar claim.

A video of the same couple was posted here on Facebook with a similar claim.

Some news websites in India and one Dubai-based newspaper also published the video or its screenshots of the elderly couple for example India Today here, Scroll.in here, Hindustan Times here, NDTV here, News18 here and Gulf News here, with a misleading claim that they were suffering from the novel coronavirus.

Most of the media reports that shared the misinformation contained screenshots of a video; some shared a video posted on Twitter on February 2, 2020, by a user named Julio Jiang Wei, the spokesperson for the Chinese Embassy in Panama. 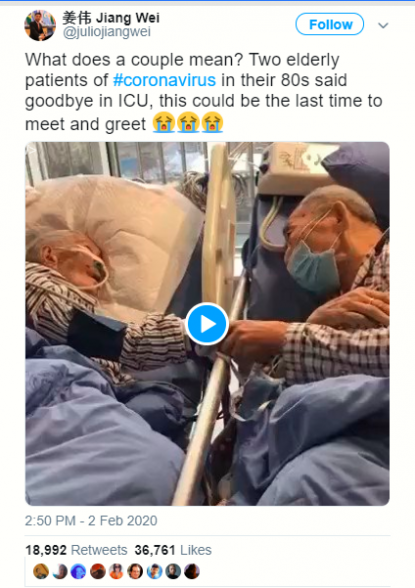 A screenshot of the tweet from an archived version

AFP’s Spanish-language fact check team contacted Jiang Wei to ask him why he had tweeted the video saying that an elderly couple died of novel coronavirus infection in hospital, but received no response. On February 17, 2020, AFP found that Jiang had deleted the tweet.

--No connection to coronavirus--

The claim in the posts and media reports is misleading; the images of the couple have previously circulated in reports that did not state they were suffering from the novel coronavirus.

A reverse image search the images found this February 4, 2020 report published by the website for British tabloid The Daily Mail.

Below is a screenshot comparison of the images in the misleading posts (L) and the Daily Mail report (R):

The Daily Mail identified the couple as Mr Zhang and Ms Wen, aged 85 and 87, who were both admitted to the Chengdu Third People’s Hospital, Xindu district, in the Chinese province of Sichuan.

The report states that Zhang arrived in hospital on January 16 due to "chronic obstructive pulmonary disease, lung cancer and atherosclerosis". A day later, Wen, who had Alzheimer's, reportedly lost consciousness and was taken to the intensive care unit, where she was put on a mechanical ventilator.

One day before the Daily Mail report was published, Chinese news site Red Star News published a story about the same elderly couple here and shared in its account on Weibo, a social networking platform in China.

According to the Red Star News report, the video was recorded on January 30.

Below is a screenshot comparison of the photos in the misleading posts (L) and the Red Star News report (R):

The Red Star news report translates to English in part as: "Red Star News journalists learned that the two elderly people in the video, Grandpa Zhang, 85, and Grandma Wen, 87, had been successively admitted to the Chengdu Third People's Hospital, Xindu district, due to illness.

"On January 16, 2020, Grandpa Zhang, 85, was admitted to the respiratory department of the Chengdu Third People's Hospital, Xindu district, due to chronic obstructive pulmonary disease, lung cancer, bone metastasis and coronary heart disease. The following afternoon, Grandma Wen, an 87-year-old woman with Alzheimer's disease, was also admitted to the intensive care unit (ICU) due to sudden impaired consciousness and respiratory failure.

"On January 30, Grandpa Zhang said to his children after learning that his wife was in serious condition, 'I want to see her, as I may not have another chance in this lifetime.' With the help from the hospital, the longtime couple finally said goodbye hand in hand at the ICU."

Neither the Daily Mail, nor the Red Star News, mentioned the couple were infected by the novel coronavirus.

The story published by Red Star News was shared by official Weibo accounts of the Chengdu Third People’s Hospital, Xindu district. "Thank you Grandpa Zhang and Grandma Wen for demonstrating the most wonderful love," the hospital posted on its account on February 4. 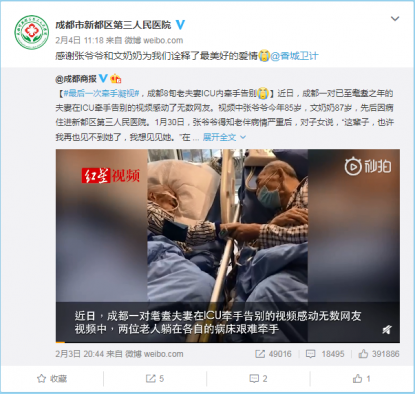 The post's caption also contained no reference to the coronavirus. The simplified-Chinese caption translates to English as: "How touching! The elderly couple said goodbye hand in hand in the ICU, which might be their last time seeing each other. This is a true story that happened at the Chengdu Third People's Hospital, Xindu district. It was a perfect illustration for the Chinese proverb 'To hold your hand, to grow old with you'!"