Two photos of a badly injured woman have been shared more than a thousand times in a Facebook post alongside a claim that Sri Lanka must stop sending Sri Lankan women into "slavery" as domestic helpers in the Middle East, warning of "the hot water attack".  The photos are being used in a misleading context; the images actually show a Vietnamese woman who was stung by a scorpion and suffered a rare medical reaction, according to local media reports and the victim's family.

The photos show a woman with what appears to be extensive damage to her skin, seated on a stool. The Sinhalese-language text above the images reads: "Dear aunt..uncle..brother... Is this not one of our very own, valuable lives? Think for a minute…”

The red writing, also in Sinhalese, above the pictures translates to English as: "Share this and save our women".

The text below the images reads: "Did you see the hot water attack?"

The poster also says: “Stop sending women to the Middle East for slavery at least now. Aren’t these our very own people?”

The photos are being used in a misleading context; the woman in the images is actually from Vietnam and her injuries are the result of a rare medical reaction to a scorpion bite, according to local media reports and the victim's family.

A reverse image search on Google for the two photos found this report published on July 22, 2015 in Kenh14, a Vietnamese news site, headlined: "Poor woman in distress with blisters all over her body because of scorpions".

The Vietnamese-language article identifies the woman in the photos as Nguyen Thi Bich, a lumber mill worker from Dong Nai, a province in the southeast of Vietnam.

According to the media report, the woman was working at the mill on July 8, 2015 when a scorpion stung her. It said she did not go to a doctor and, in a rare reaction to scorpion venom, her body started breaking out in blisters.

When she was taken to the Dermatology Hospital in Ho Chi Minh City that evening, doctors found Bich suffering from severe poisoning and anaphylaxis, the report says.

Below is a side by side comparison of the image that appeared on the post (L) and the image published in the Kenh14 article (R). 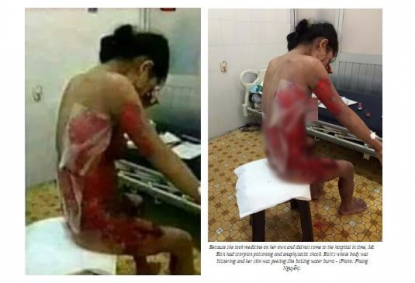 The caption under the blurred photo on the right reads: “Because she took medicine on her own and did not come to the hospital in time, Ms. Bich had scorpion poisoning and anaphylactic shock. Bich’s whole body was blistering and her skin was peeling like boiling water burns.”

Here is another article published in a Vietnamese media outlet on August 1, 2015 with similar details of the woman’s reaction to the scorpion sting.

A journalist from AFP’s Hanoi Bureau spoke by telephone to Bich’s family in Vietnam's Kien Giang province about the images and the Vietnamese-language media reports.

“It was my sister. She was biten by scorpions, doctors said. The pictures I believe were taken by medical workers in the hospital when my sister was hospitalised in 2015. Now she is much better of course but the wounds are still there,” Bich's brother told AFP, adding that the Vietnamese media reports were accurate.

“She still has to go to the hospital once every one or two months to receive treatments,” he added.