An article shared in multiple posts on Facebook and Twitter claims Lagos has seen nine confirmed novel coronavirus cases, including four deaths. But the claim is false; health officials told AFP there were no confirmed coronavirus deaths or cases in the country as of February 18, 2020. The story was fabricated from recent reports on a Lassa Fever outbreak in central Nigeria.

The misleading article was published by Orange Blog on February 12, 2020 and has been shared more than 7,000 times on Facebook, according to CrowdTangle, a social media monitoring tool. We’ve archived some of the posts here and here. 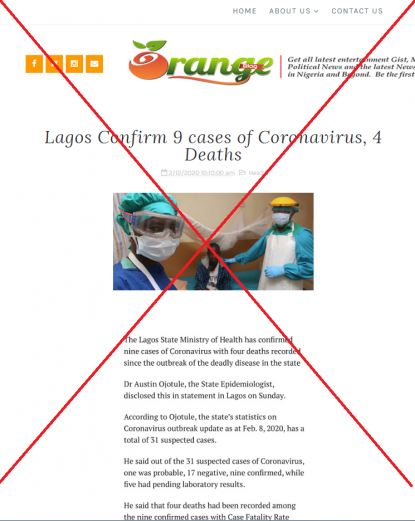 Screenshot of the misleading article, taken on February 18, 2020

The story alleges a Lagos state epidemiologist called Austin Ojotule confirmed in a statement there had been nine confirmed cases of novel coronavirus, of which four had resulted in deaths.

According to the article, Ojotule said that out of 31 suspected coronavirus cases in Lagos state by February 8, “one was probable, 17 negative, nine confirmed, while five had pending laboratory results”.

Nigeria, Africa’s most populous country, has been battling a resurgence of Lassa Fever - an endemic viral disease that claimed at least 41 lives in January 2020, as AFP reported here.

At the same time, it has also been taking precautions against the new coronavirus, which has infected more than 70,000 people globally and claimed nearly 1,900 lives since its emergence in China in December 2019.

Source of the claim

AFP tracked down the origin of the misleading report to this article published on a website called “Fox News Nigeria” on February 9, 2020 -- the same day the state-run News Agency of Nigeria (NAN) reported that nine cases of Lassa fever including four deaths were confirmed in Kogi State since its emergence a month earlier. 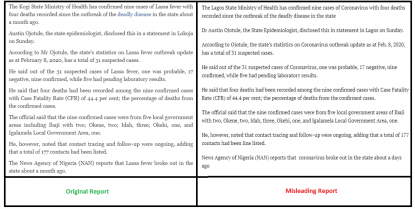 Screenshots of the News Agency of Nigeria’s report (left) and the misleading article (right), taken on February 18, 2020

Both articles have almost identical content but keywords such as “Kogi” and “Lassa fever” in the agency’s report were replaced with “Lagos” and “Coronavirus” in Fox News Nigeria’s misleading version.

Unlike the original article -- also published by leading Nigerian newspaper The Nation -- Fox News Nigeria's story is littered with errors.

The misleading publication further claims that the "confirmed cases" in Lagos state were from Ibaji, Okene, Idah, Okehi, and Igalamela Local Government Areas. However, the towns are five of Kogi's 21 council areas and have no connection with Lagos.

AFP found that Ojotule is not one of the 14 principal officers of the Lagos State Ministry of Health, but he was quoted in several reports including this one as "Kogi State Epidemiologist". The title also appears on Ojotule's Facebook profile.

This publication surfaced less than a week after Fox News Nigeria published another misleading post claiming cases of coronavirus were reported in Nigeria on February 4, 2020. 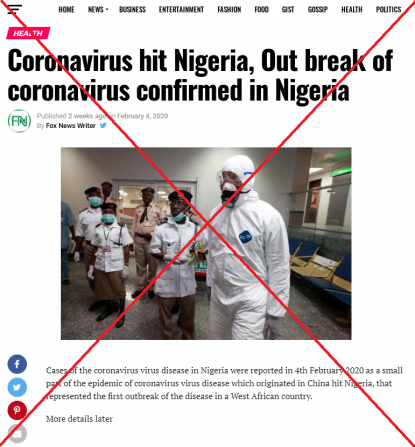 Screenshot of the misleading article, taken on February 18, 2020

Neither Orange Blog nor Fox News Nigeria has disclaimers on their websites flagging their content as satire. They also lack functioning “about us” sections, which normally contain details about those running the platforms.

Lagos State Health Commissioner Akinola Abayomi confirmed the purported coronavirus cases in the state were false. “This is totally false. To date (February 18, 2020), all suspected cases of coronavirus that have been flagged have come back false,” Abayomi told AFP.

The Nigeria Centre for Disease Control also told AFP it had no records of coronavirus cases in the country since the beginning of the outbreak, as of February 17, 2020.

The novel coronavirus outbreak has fuelled global false claims about the disease, including many in Africa. Click here for a round-up of AFP’s debunks on the topic.