Skip to main content
A screenshot of the misleading video taken on April 17, 2019

A suspicious person on a tower of Notre-Dame? No, a firefighter inspecting the blaze

Multiple social media accounts have shared a video showing a man in a high-visibility jacket in one of Notre-Dame’s towers just after the fire broke out on Monday. Captions with the video imply the fire which ravaged the cathedral was not accidental, as investigators believe. However, the person in the video is a firefighter. 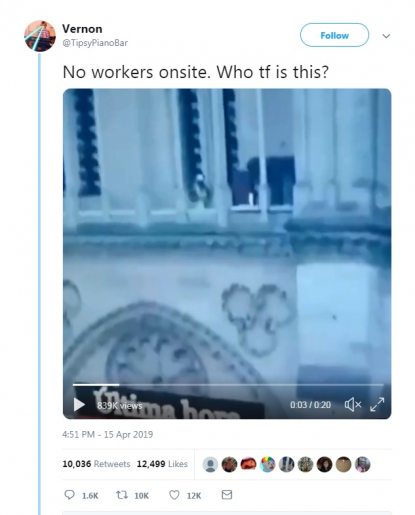 A screenshot of the misleading video taken on April 17, 2019

The video, posted by US-based Twitter user @TipsyPianoBar (archived link) on Tuesday has racked up more than 10,000 shares. The footage is accompanied by the caption, “No workers onsite. Who tf is this?” The low-quality video, which appears to have been filmed on a smartphone, shows a man wearing a high-visibility jacket walking along a passage in one of Notre-Dame’s towers.

In a later post, @TipsyPianoBar insists the person “is not a firefighter”.

“I don’t know who it is and have made no claims, but it is not a firefighter or a clergyman and French authorities say no workers present,” he tweeted, referring to the cathedral’s evacuation shortly after the fire broke out.

In a similar post, Ezra Levent, who describes himself as ‘rebel commander’ of alternative Canadian news site The Rebel Media, shares the video with the caption, “Who is this? A fireman? A construction worker? Or someone else?” The post has been retweeted more than 2,000 times.

The footage has also been shared by Italian and French Twitter accounts. One user said the person was dressed “in a Muslim way”.

French lawmaker Meyer Habib also posted the footage, with the caption “Accident or arson? No possibilities should be ruled out (...) The truth and nothing but the truth!” 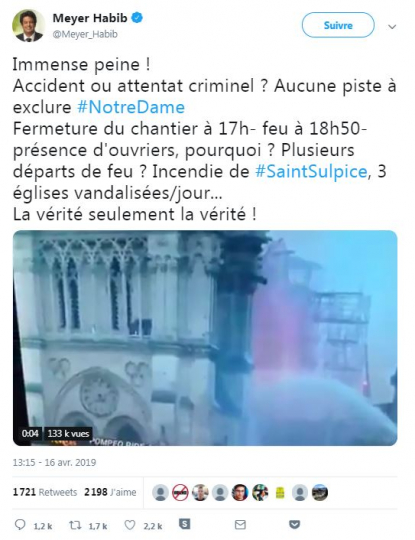 The video likely came from a tweet in Spanish, posted Monday at 8.51pm Paris time, as French fact-checking site Check News has reported. The footage appears to show a person on a smartphone filming a TV news report by Spanish channel RTVE.

American news station CNBC also broadcast a high-quality version of the footage on its YouTube channel. The person in the high-visibility jacket comes into shot 42 minutes into the video.

Shortly after, a man arrives wearing a helmet and oxygen tank (42 minutes 50 seconds). He appears to unroll a hosepipe before another man joins him.

Contacted by AFP, the Paris fire brigade confirmed that the man in the high-visibility jacket was a firefighter. “It's the Paris fire brigade’s operations manager,” spokesman Lieutenant-Colonel Gabriel Plus told AFP. He said the man was performing an “inspection” to assess the state of the fire.

The man was wearing a high-visibility jacket because he was the head of the rescue operations, said a fire brigade spokesman.

Investigators are treating the fire as an accident, the Paris prosecutor Remy Heitz said Tuesday. “Nothing suggests that it was a voluntary act,” he said, as AFP reported.