Skip to main content
Police chase down a couple wearing facemasks in the central district in Hong Kong on October 5, 2019. (AFP / Nicolas Asfouri)

Multiple articles and social media posts published in January 2020 claim a new study by a Canadian think tank ranked the Hong Kong Police Force the sixth most reliable in the world in 2019, when the city was hit by months of pro-democracy protests. The claim is misleading; the study was compiled based on data from 2017, two years before large-scale pro-democracy rallies broke out in 2019; one of the report’s authors told AFP the study had been misrepresented and that he expected Hong Kong police's score to “decline greatly” in 2020 following its handling of the 2019 demonstrations.

The misleading claim was published here on a Hong Kong-based website on January 19, 2020. 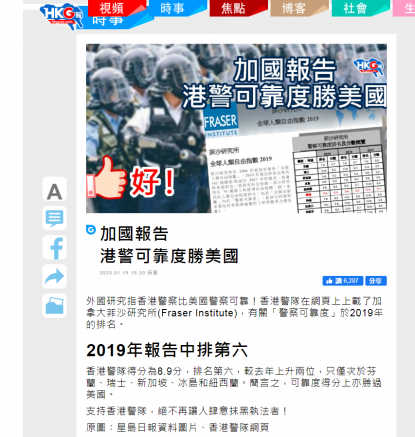 A screenshot of the misleading report

The traditional Chinese-language report translates to English as: “Foreign research says Hong Kong police are more reliable than US police! The Hong Kong Police Force uploaded the 2019 ranking of 'Police Reliability' by Canada's Fraser Institute to their website.

A similar report was published here in English by Chinese state broadcaster CGTN on January 20.

A similar claim was also published here in a tweet by the China News Service, another Chinese state media company, on January 19, and elsewhere on Twitter here, here and here.

The claim is misleading; the study cited in the reports was conducted by Canadian think tank Fraser Institute using data from 2017.

The institute’s Human Freedom Index (HFI) 2019, which was published on December 18, 2019, states Hong Kong is ahead of the United States in "Reliability of Police” by 0.7 points.

The score is calculated based on results from a question in World Economic Forum's Global Competitiveness Report: “To what extent can police services be relied upon to enforce law and order in your country? (1 = Cannot be relied upon at all; 7 = Can be completely relied upon)," as stated on page 397 of the HFI report.

Below is a side-by-side comparison of a section of the tables for Hong Kong (L) and the US (R) from the HFI report with relevant items circled in red by AFP:

Hong Kong ranked third overall in the freedom index, as detailed on page 184 of the report.

However, the report states in its summary on page 7: “The HFI is the most comprehensive freedom index so far created for a globally meaningful set of countries. The HFI covers 162 countries for 2017, the most recent year for which sufficient data are available. The index ranks countries beginning in 2008, the earliest year for which a robust enough index could be produced.”

On page 36, it states: “Hong Kong has declined in its HFI ratings and ranking since 2008 and, as the political future of Hong Kong plays out, we would not be surprised to see further declines.”

Hong Kong has entered its eighth month of pro-democracy protests, sparked by opposition to a now-scrapped bill which would have allowed extradition to mainland China. Here is a January 23, 2020, AFP report on the issue.

In an email to AFP on January 24, 2020, Fraser Institute Resident Fellow Fred McMahon said the HFI 2019 had been misrepresented in the misleading articles and social media posts.

He said he expected Hong Kong’s score for the reliability of its police force to “decline greatly” in future studies, based on data from the World Economic Forum (WEF).

Commenting on the Hong Kong Police Force’s position in his think tank’s study, he said: “That almost certainly would not be true now. The size of this round of demonstrations and the recent election results strongly suggest the public continues to support the demonstrators, which also implies the public is not onside with the police and their heavy handed tactics. Surveys from the University of Hong Kong show strong disapproval of police.

"The bottom line is I expect Hong Kong’s score on this variable to decline greatly in the 2020 WEF survey.”

He added: “The police’s handling of the Umbrella Movement demonstrations in 2014 was restrained and appears to have been respected by the population. Hong Kong officials at the time frequently made the point, rather fairly, that no other major city would have acted with its restraint in the face of such disruptive demonstrations. So it is not surprising police favorability remained high in HK in 2017.”

Separately, Amnesty International has condemned in this September 2019 report what it termed an “alarming pattern of the Hong Kong Police Force deploying reckless and indiscriminate tactics” during recent pro-democracy protests.

Hong Kong police have faced mounting accusations of brutality since the beginning of pro-democracy protests in June 2019, as reported here by AFP.