A post shared tens of thousands of times on Facebook claims South Dakota has the lowest number of COVID-19 cases per 100,000 inhabitants as well as the lowest job losses in the US, while not having instituted a lockdown. This is misleading; cases in the prairie state surpassed the rate claimed in the post months earlier, though it has managed to keep its unemployment rate relatively low compared to most states.

“South Dakota never did Lockdowns. 4 cases per 100,000 ppl, lowest in Nation and lowest Job losses in Nation. Feel lied to?” says a July 10, 2020 Facebook post, which is no longer available. Examples of the post can also be found here and here. The claim has circulated since at least May 21, 2020, when Facebook groups were springing up to call for an end to widespread lockdowns in the United States that shut non-essential businesses in a bid to curb the spread of the coronavirus, but caused 20.5 million job losses in April alone.

The coronavirus pandemic has claimed more than 140,000 lives in the US. After a surge particularly in the south and west, the number of new daily cases now far exceeds those at the time the initial business closures occurred, prompting California to shutter bars and some other businesses again, while other jurisdictions look at similar rollbacks.

AFP Fact Check breaks down the false and misleading claims below.

As of the time the post was shared, the claim was false.

South Dakota’s population was estimated at 884,659 in 2019 -- the latest data available. Using that figure and COVID-19 case data from Johns Hopkins University, the state reached the ratio of four cases per 100,000 inhabitants on March 25 and has far exceeded it since. 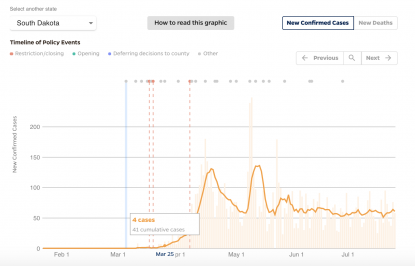 A screenshot of a Johns Hopkins graphic of COVID-19 cases in South Dakota, taken on July 23, 2020

As of July 23, 2020, South Dakota had the 29th-highest number of coronavirus cases per 100,000 inhabitants out of 60 US states and territories, according to the Centers for Disease Control and Prevention.

“States differ in many ways, so without taking into account those differences, it’s hard to say ‘state X is ranked higher than state Y, so state X is doing the right thing on this or that policy,’” Mike Allgrunn, Professor of Economics at the University of South Dakota, told AFP by email.

He added that different approaches could be used to look at the effect of the pandemic on the job market.

It is important to note that “South Dakota had lower unemployment than the US as a whole before the coronavirus,” Allgrunn said. “Like most states, South Dakota unemployment rates peaked in April in response to the pandemic and associated government policies.”

South Dakota reached an all-time high of 10.9 percent in its unemployment rate in April. Most other states except for Alabama, Missouri and West Virginia reached records that month, but the all-time highs reached by some were lower than South Dakota’s, including 9.6 percent in Wyoming, 9.1 percent in North Dakota, and 10.4 percent in Utah.

According to data through July 4, South Dakota had the lowest percentage of the workforce of any state -- 4.0 percent -- that has claimed unemployment relative to February 2020, Allgrunn points out.

But by another measure -- seasonally-adjusted numbers for June -- South Dakota had the ninth-lowest unemployment rate in the nation, an estimated 7.2 percent, better than its 2019 average, when it ranked 18th.

From May to June, South Dakota fell in the middle of the states, ranked 25th, in terms of the percentage change in unemployment, which dropped from 9.4 percent in May.

Allgrunn said that “South Dakota’s labor market does seem to be doing relatively well in a difficult time.”

“We haven't locked people up, forced businesses to close, or ordered a shelter-in-place,” Republican Governor Kristi Noem tweeted on June 8, preferring instead to “TRUST them to exercise their freedom to make the best decisions.”

South Dakota, known for corn fields and cattle ranches, was one of only five US states without a lockdown order.

Businesses could operate almost as usual but whether or not shops opened seemed to vary according to municipal regulations and with a limit of no more than 10 people at the same time inside.