Multiple posts shared repeatedly on social media claim the International Monetary Fund (IMF) warned South Korea’s economy will not recover from the impact of the Covid-19 pandemic until at least 2026. The claim is misleading: the posts have misrepresented an IMF report published in April 2021 that focused on government fiscal expenditures, not economic recovery. Separately, the IMF projected that South Korea’s economy will show signs of recovery from 2021. 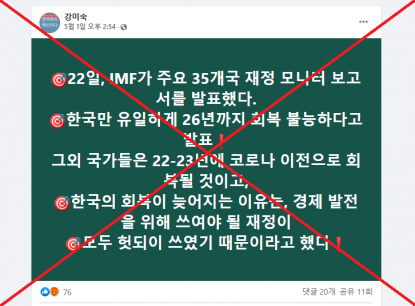 “On the 22nd, the IMF released a fiscal monitor report on 35 major countries. Korea was the only one that was reported not able to recover until 2026!” the text reads.

“Other countries will return to the state before Covid between 2022 to 23, and [the report] said the reason why Korea’s recovery will be so slow is the misuse of its fiscal spending!”

The posts refer to the IMF’s April 2021 Fiscal Monitor report, which was published here on its website.

Similar claims were shared on Facebook here, here and here; and here on the South Korean platform KakaoStory.

The IMF's report analysed fiscal measures implemented by 35 countries, including South Korea, in response to the Covid-19 pandemic. It did not assess economic recovery projections.

Before the pandemic, South Korea’s general government expenditure was 22.6 percent of GDP in 2019.

The IMF projects South Korea’s general government expenditure will remain at around this level up until 2026.

By contrast, the IMF forecasts that the other 34 countries will incrementally reduce expenditure down to pre-pandemic levels by 2026.

South Korea’s economy weathered the pandemic relatively well compared to other countries due to various economic measures, according to the IMF.

The IMF’s annual evaluation of the South Korean economy was published on March 25, 2021.

This is included in its World Economic Outlook report published in April 2021.

South Korea’s economy was showing signs of recovery from the impact of the pandemic, economists told AFP in early May 2021.

Hur Jin-wook, an economist at the Korea Development Institute, a government-run research agency, said: “We can’t foresee whether there may be more economic shocks until 2026, but we project that recovery from the Covid-19 shock will be likely this year and the next.”

“There doesn’t appear to be a reason why immediate economic recovery [from the pandemic] is not possible; continued government spending - even if it may not be efficiently used - is likely to boost growth in the short term,” he said. “However, if government expenditure continues to rise until 2026, then we may be able to see negative effects."

The Bank of Korea projects South Korea’s economy will grow by three percent in 2021, as stated in this press release.