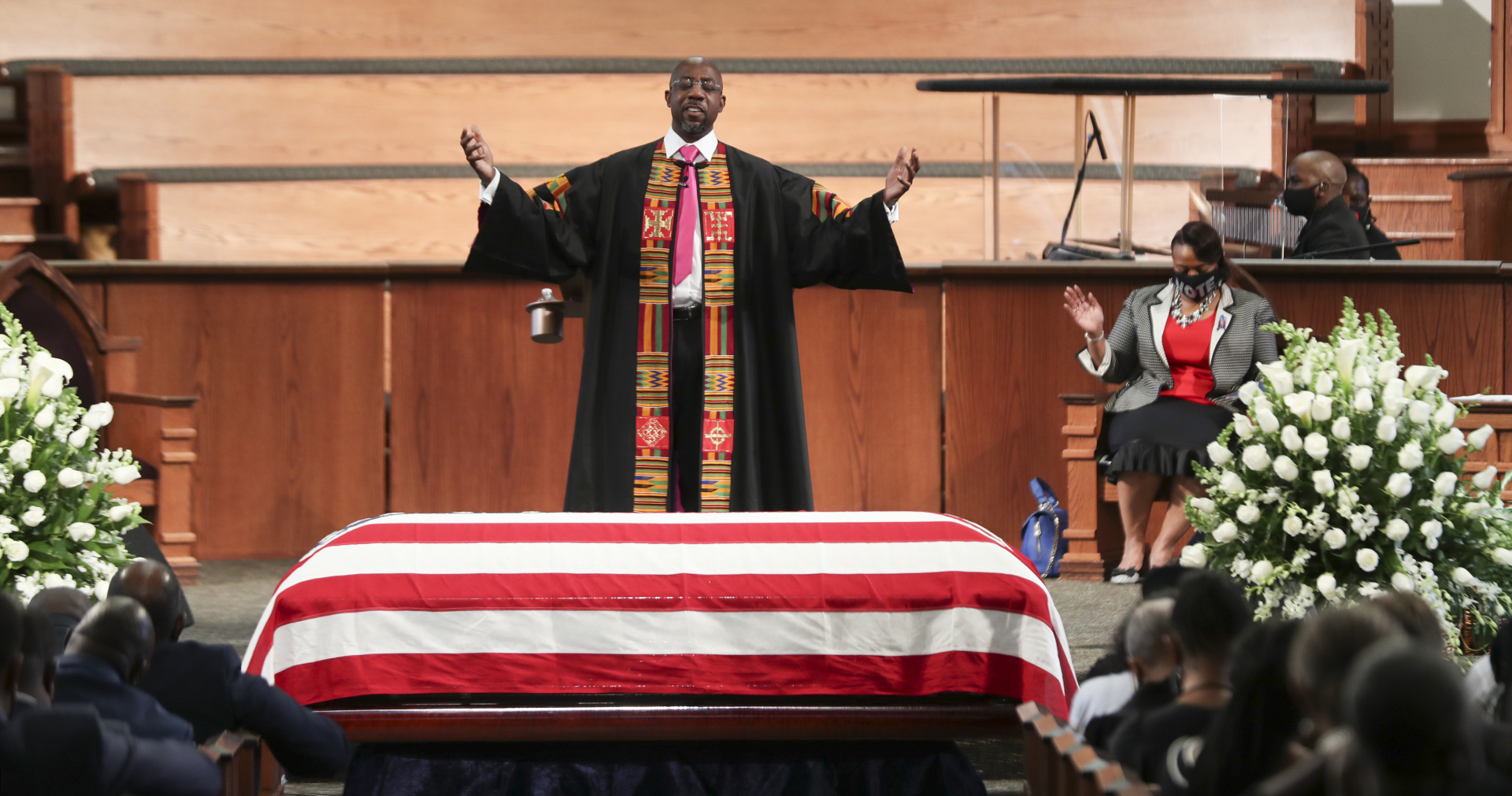 Social media posts shared more than 100,000 times claim social distancing aimed at preventing the spread of coronavirus was not practiced at the funeral of civil rights icon John Lewis, and that the church was full. This is false; photographs clearly show space between mourners, and a spokesperson for the church said it reached only a fraction of capacity as people stayed six feet apart, except for members of Lewis’s grieving family.

“How come famous people like Congressman John Lewis and ‘Saint’ George Floyd are allowed to have funerals that violate social distancing policies, but regular folks can't?” said a July 31, 2020 Facebook post on the page of Mark Dice, who describes himself as a media analyst and author who exposes “the liberal lunatics and their manipulation of mainstream media.” 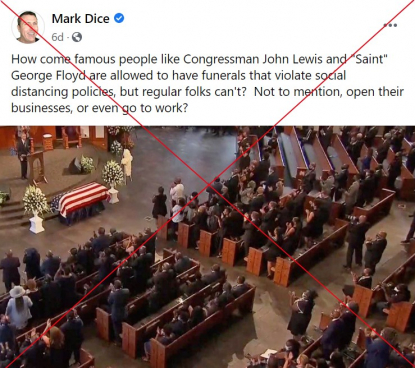 The post was accompanied by a photograph from the July 30 funeral of the Democratic congressman showing a middle section of the church where people did sit close together.

Other Facebook posts claimed the church was “full of people” and  “thousands” were allowed inside.

But it is false to claim that social distancing was not followed, or that the service at Ebenezer Baptist Church in Atlanta, Georgia was packed.

A church spokesperson told AFP by phone that those in the middle were Lewis’s relatives.

“As you can imagine, a family that is grieving and trying to console each other, they chose, because they're related and they're family, they chose to sit a little closer together,” she said.

“In all other areas of the church they were socially distanced,” following Centers for Disease Control and Prevention (CDC) guidelines to help prevent the spread of COVID-19, she added.

Ebenezer Baptist has a capacity of 2,000, but “less than 10 percent of the seating capacity of the church” was occupied, she said, adding: “You can't say ‘full’, you can't say ‘thousands’” were there.

The church’s senior pastor, Raphael Warnock, referred to social distancing at the 39:32 mark of the livestreamed service when he spoke of “these difficult days that have even made grieving more challenging. At a time when we would find comfort in embracing one another, love compels us to socially distance.”

Ahead of the funeral, the Lewis family said that because of “precautions necessary during the pandemic, the church will only accommodate 240 people in total, due to social distancing precautions.” Half of those seats were allocated for his family and relatives, they said in a statement carried on the Facebook page of Phi Beta Sigma Fraternity’s Nu Alpha Sigma Chapter.

Lewis was a brother in the fraternity.

Photographs taken by a pool photographer clearly show empty space between those in the pews. Mourners are also wearing face masks, which are another CDC recommendation for protecting against viral spread during the pandemic. 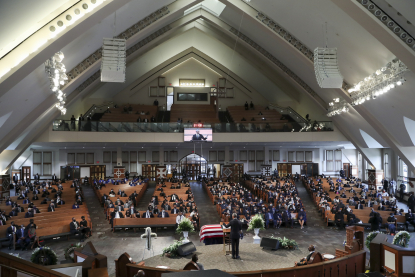 Georgia is one of the US states worst-affected by cases of the coronavirus. In April it controversially became the first large state to reopen its economy after a coronavirus lockdown, even as it grappled with substantial numbers of coronavirus cases and a rising number of infections and deaths.

Republican Governor Brian Kemp has since banned gatherings of more than 50 people unless there are six feet between them.

Former presidents Bill Clinton, George W Bush and Barack Obama all paid homage to Lewis during the service, as did House Speaker Nancy Pelosi. She attended with a delegation of about 50 other members of Congress, among them Republican Representatives Barry Loudermilk of Georgia and Kevin Brady of Texas.

Lewis’s body had earlier lain in state at the US Capitol, a rarely-bestowed honor. Lewis was a proponent of non-violence whose skull was fractured by a state trooper during a 1965 march for voting rights that he helped lead in the struggle for racial equality.

He represented a Georgia district in the House of Representatives for 33 years until his death from cancer on July 17.

The funeral took place in a new church building across from the historic site where Martin Luther King, Jr served as co-pastor until his assassination in 1968.