Skip to main content
Serena Williams of the US at the Australian Open tennis tournament in Melbourne on January 24, 2020 (AFP / David Gray)

A Facebook post arguing against racial distinctions was shared around 200,000 times by users who seemed to believe it came from tennis champion Serena Williams. However, the post, which emerged amid protests across the United States over racism, did not come from the global tennis icon, but instead from a white woman with the same name. Williams has used her social media platform to argue for more acknowledgment of racial disparities in the US.

“Serena Williams just hit the nail on the head, this is exactly my thoughts,” one Facebook user wrote on June 22, 2020 as a caption to a screenshot of this post from a user named Serena Williams. She shares her frustration with distinctions between “black vs. white,” “Democrats vs. Republicans,” “Christians vs. atheists” and, more generally, judgment based on diverging political views. 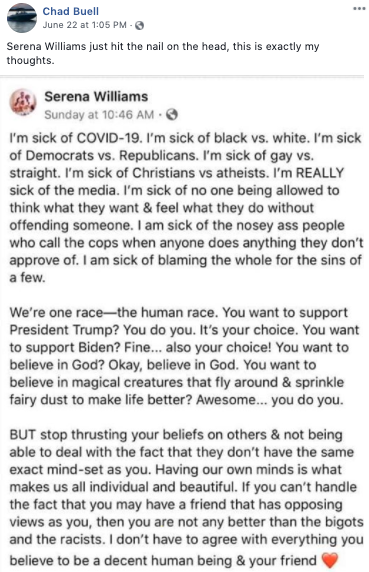 The post was shared more than 162,000 times, largely from people seeming to believe it came from the US tennis superstar, as posts tagging her show. Posts that only include the screenshot were shared several thousands times more.

However, the author of the post is not the Serena Williams who won 23 Grand Slam single titles.

The Facebook user through whom the text became viral published it on June 14, 2020 and specifies in her Facebook biography that she is “not THAT Serena Williams.” Williams changed her profile picture since publishing her text, which explains the discrepancy between past screenshots and her current profile page. 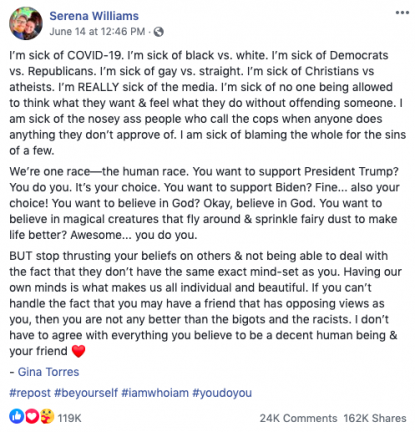 After it became widely shared, she also edited her post to credit another Facebook user, Gina Torres, who appears to have published the original text on June 2, 2020. Williams did not respond to AFP requests for comment on the matter by the time of publication.

Williams the tennis player, on the other hand, also posted political content addressing race issues on social media in recent weeks, but from a very different perspective.

Rather than discounting the experiences of different races in the United States, Williams pointed out the negative treatment of black people in several videos.

Williams has been particularly vocal on the matter since the death of George Floyd, a black man who died while in police custody, sparking protests against racism and police violence across the US.

Williams’ husband, Reddit co-founder Alexis Ohanian, announced in early June 2020 his departure from the online platform’s board in order for the company to open his position to a person of color.

AFP contacted Williams for comment but did not receive an answer by the time of publication.