A purported television news report has been viewed hundreds of thousands of times in multiple posts on YouTube and on websites in June 2020 which claim it shows a report about the "death" of Filipino actor Piolo Pascual in a carjacking. The claim is false; the video has been created using an earlier TV news report about an unrelated car robbery in 2015; on July 1, 2020, Pascual’s management team said rumours about the actor’s “death” were “fake news”. 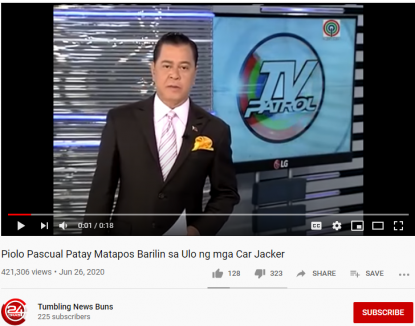 The video appears to show a segment from TV Patrol, an evening news report in the Philippines. Its Tagalog-language caption translates to English as: "Piolo Pascual Dead After He Was Shot in the Head by Car Jackers".

The first 13 seconds of the video shows TV Patrol anchor Noli De Castro saying: “A carjacking incident in Santa Mesa, Manila, this dawn was caught on CCTV. The suspects ran away with the victim’s SUV, mobile phone and bag full of…”

The video then cuts to a photo of Piolo Pascual, a Filipino film and television actor.

Identical videos have also been shared here on YouTube, and embedded on websites here and here alongside a similar claim.

Pascual’s management team said rumours that the actor was killed in a car robbery in June 2020 were false.

“Fake news,” a representative for Pascual’s team told AFP in a text message on July 1, 2020. “He is very much alive.”

Keyword searches on Google found the video in the misleading posts was taken from this TV Patrol report published on YouTube on July 15, 2015.

Below is a screenshot comparison of the video in the misleading posts (L) and the 2015 TV Patrol report (R):