A claim that the president of Sri Lanka’s court of appeal, Judge A.H.M.D Nawaz, was appointed to the top post after allowing a lawmaker on death row to attend parliamentary sessions has been shared in multiple Facebook posts. The claim is false: the convicted lawmaker was granted permission to attend parliament in September 2020, over eight months after Nawaz was made president of the court of appeal in January 2020.

The post features a photo of Sri Lankan President Gotabaya Rajapaksa shaking hand with Nawaz and includes superimposed Sinhala text that translates as: “Position of Court of Appeal President given to corrupt Mohamed Nawaz after he granted permission to parliamentarian 'Choka Malli', who is accused of murder, to attend parliamentary sessions”. 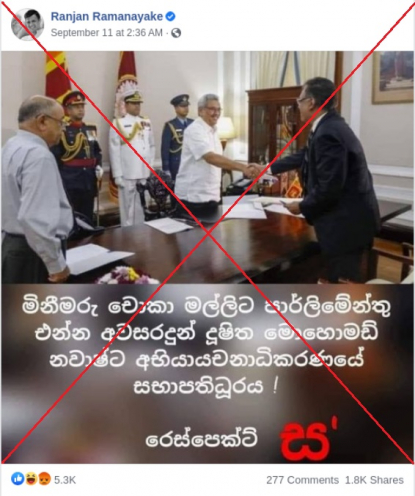 “Choka Malli” is an alias for Premalal Jayasekara, a lawmaker from the Sri Lanka Podujana Peramuna political party who was sentenced to death in July 2020 for a murder during the 2015 presidential election.

On September 07, 2020, the court of appeal granted Jayasekara permission to attend parliamentary sessions.

Nawaz was first appointed as acting president of the court of appeal on January 20, 2020, over eight months before Jayasekara was granted permission to attend parliament.

The appointment announcement can be seen in this official presidential statement. 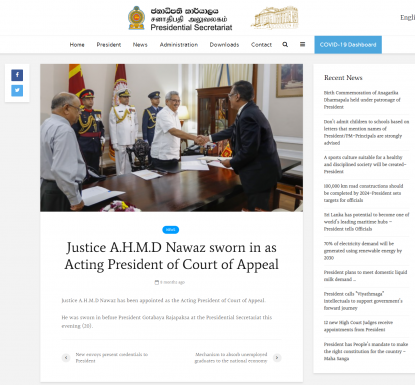 The appointment announcement can be seen in this official presidential statement.

The image published by the president’s office also matches the image seen in the misleading Facebook posts.

Below is a screenshot comparison of the official press release in January 2020 (L) and the misleading Facebook post (R):