Videos claiming that Clearblue pregnancy tests contain a type of morning-after pill called Plan B have been shared thousands of times on social media. The claim is false; the company said the tablet was intended to absorb moisture and should not be consumed.

The videos have been circulating on Facebook, Twitter and TikTok since at least July 2019, including here and here.

“Bet y’all didn’t know there was a plan b pill inside a pregnancy test (sic),” reads the caption on a Facebook post shared more than 18,000 times since August 3, 2019. 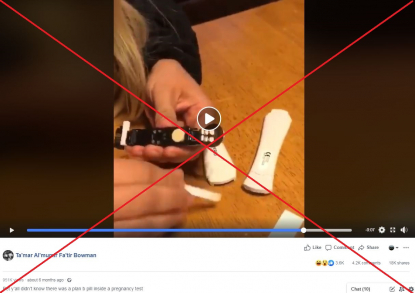 A screenshot of a video shared on Facebook, taken on February 11, 2020

“No way! There actually is!” one of them says. “There is a Plan B pill in these pregnancy tests.”

A similar video shared on Facebook shows a couple opening a pregnancy test with a knife, only to discover the “pill”.

“Oh my gosh, it’s really in there!” the woman says, before her partner jokes, “You’re like ‘oh, you don’t want the baby? Now you’ve got a decision!’”

'Should not be eaten'

However, manufacturer Clearblue rubbished the claims.

“Clearblue tests do NOT contain Plan B,” the company said on its website. “All our tests contain a desiccant tablet to absorb moisture and should not be eaten”.

We are aware of videos about Clearblue pregnancy tests and the tablet inside. Clearblue tests do NOT contain Plan B. All our tests contain a desiccant tablet to absorb moisture and should not be eaten. If accidentally ingested, seek medical advice. Questions? 1800-321-3279

The false claims have sparked debunks around the world, including in the US, the UK, Ireland, France and Germany.