A post on Instagram claims that French economist Jacques Attali discussed depopulating the planet by orchestrating a pandemic in his book “The Future of Life” published in 1981. This is false: while Attali was interviewed in a book called "Future Life" (first published in French as "L'Avenir de La Vie" in 1981), he did not write it, and he does not mention depopulation in his interview.

It claims to show an excerpt from the book “The Future of Life”,  allegedly written by Attali.

“The future will be about finding a way to reduce population,” the alleged quote begins. 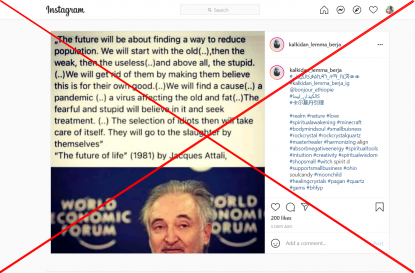 Attali, a former adviser to late French president François Mitterrand, has written numerous books. However, none of them were called “The Future of Life”.

“Future Life”, published in 1981 in French as "L'Avenir du Futur" and later translated into English, was written by Michel Salomon and features an interview with Attali in which he answers the question “Is it possible and desirable to live 120 years?”

The book's publisher, Seghers, sent AFP a copy of the passage in which Attali is quoted.

At one point in the interview, Attali says: “...as soon as a person gets to be older than sixty or sixty-five, and his productivity and profitability begin to slip, he costs society dearly." And later: “Actually, from the viewpoint of the cost to society, it is much preferable that the human machine abruptly stop functioning than that it deteriorate very gradually."

A longer version of the same claim circulated in French, which AFP Fact Check debunked here.

"This text is completely made up... It is in no way close to the initial excerpt. It is like saying that I wrote ‘Mein Kampf’", Attali told AFP Fact Check on April 12, 2021.

AFP Fact Check has previously debunked two other false quotes attributed to Attali about media conspiracies and Covid-19 (in French).