A photo of man has been shared thousands of times in multiple posts on Facebook and Twitter alongside a claim that he was a security guard who was shot dead while attempting to thwart a gunman in Thailand. The posts claim that Thai police obtained vital DNA evidence from the gunman’s sweat because of the guard’s actions. The claim is misleading; the man in the photo has been identified as the security guard killed in the robbery, but police said they were not been able to extract the gunman’s DNA from sweat. 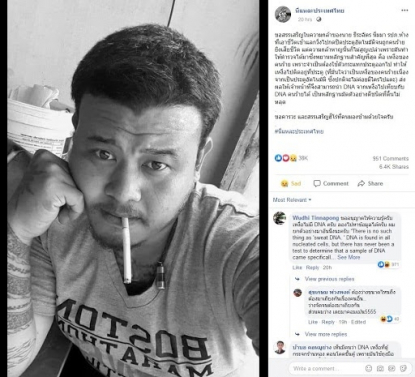 The post’s Thai-language caption translates to English in part as:

“Praise the bravery of Mr. Theerachatr Nimma, the security guard of a department store who sacrificed himself by shutting the automatic doors, which resulted in him being shot dead by the robber. But his bravery was not for nothing as the police were able to obtain the suspect's sweat which turned out to be DNA evidence for the police to confirm the suspect's identity. #thisisThailand”.

The post is referring to an armed robbery and triple homicide that occurred at a gold store in Lopburi, Thailand on January 9, 2020. The suspect was arrested on January 22, 2020, as reported here by the Bangkok Post, an English-language newspaper in Thailand.

The claim is misleading; Thai police refuted that they had obtained any DNA evidence from the suspect’s sweat.

“We did not obtain the gunman’s DNA from his sweat, I would like to reiterate this so we don’t have to mention it again. We don't have the suspect's sweat as evidence," said Police Lt Gen Suwat Jangyodsuk, Chief of Provincial Police Region 1, at a press conference at the Royal Thai Police headquarters in Bangkok on January 23, 2020.

Local media also reported here and here that police identified the suspect thanks to tips from local residents and by verifying the gun and silencer used in the attack.

The photo used in the misleading post does show the late security guard.

AFP confirmed that the black and white image was made by one of the victim's friends, who originally posted the photo on Facebook here in a condolence post. The friend told AFP via Facebook on January 29, 2020 that he took the photo from the victim's Facebook account here.

PPTV, Thailand’s digital TV channel, also published a photo of the security guard here on January 13, 2020. The report shows a framed picture of a man who corresponds with the man seen in the misleading posts.

Below is a comparison of the man in the misleading posts (L) and in the PPTV report (R):

The report’s Thai-language headline translates to English as: “The family of the security guard chief at Robinson Shopping Mall worries about his 3 young children after he was shot dead during the gold store robbery”.​

The photo also corresponds with photos from the victim's funeral posted on Facebook here.