A photo of Chinese Premier Li Keqiang eating in a tent has been viewed thousands of times on Weibo, WeChat and Twitter in February 2020 alongside a claim that it shows him dining in the central Chinese city of Wuhan during the ongoing novel coronavirus outbreak. The claim is false; the photo was taken during Li’s visit to Sichuan following a deadly earthquake in 2013.

The simplified Chinese language caption translates to English as: “This is our premier in the infected area in Wuhan, having a bowl of rice, a packet of pickles and a bottle of mineral water for a meal. What reason do we have to not stay home and avoid adding trouble to our government and society?” 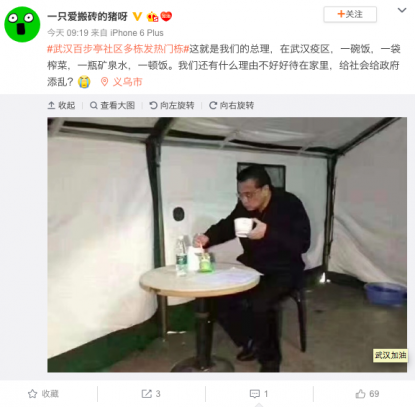 But the claim about the photograph in the misleading posts is false.

A reverse image search on Google found that the photo was taken in 2013 during Li’s visit to Lushan, a city in Sichuan province, in the aftermath of a deadly earthquake. The photo was published in this April 21, 2013, report on the Chinese Communist Party (CCP) news site.

The photo caption, which was credited to Chinese state media CCTV, translates to English as: “April 21, Lushan, Premier Li Keqiang’s breakfast consists of a bowl of rice porridge and a packet of pickles.”

Below is a screenshot comparison of the photo in the misleading post (L) and that posted by the CCP (R):

AFP also covered Li’s visit to quake-ravaged Sichuan in this April 23, 2013, report, which states in part:

“Premier Li Keqiang left the quake zone on Sunday, state media reported, after rushing to the area the day before to direct rescue efforts, in his first major public test since being appointed to the senior post in March."

A photo of Li’s 2013 visit to Lushan taken by Chinese state media organisation Xinhua can be viewed here. 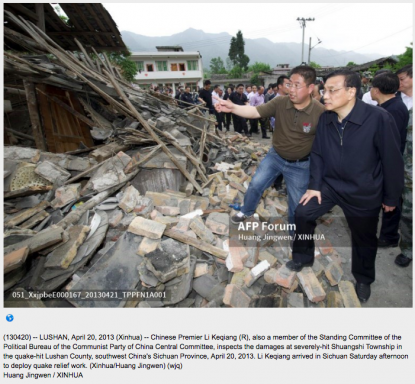 The Wall Street Journal reported on April 22, 2013 that the shares of a Chinese preserved pickle producer soared amid the disaster thanks to the popularity of Li’s photo.