A photo has been shared hundreds of times in multiple posts on Twitter and Facebook alongside a claim that it shows a hospital in Wuhan, China that was constructed in just 16 hours following the outbreak of a new strain of coronavirus. The photo has been shared in a misleading context; it is a stock image of the hospital that has circulated online since at least January 2019; AFP visited the construction site of a new hospital in Wuhan on January 27, 2020 and found it was still in the very early stages of development.

The image was shared here on a Nepal-based website. Below is a screenshot of the misleading article: 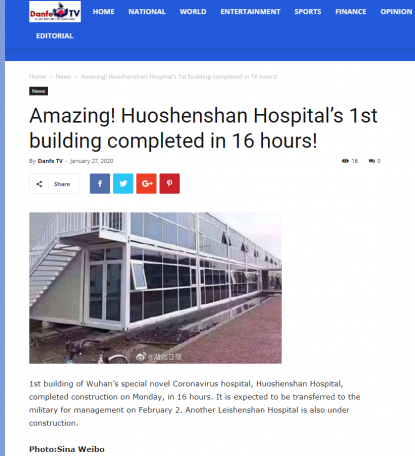 A screenshot of the misleading article

The report states: “1st building of Wuhan’s special novel Coronavirus hospital, Huoshenshan Hospital, completed construction on Monday, in 16 hours. It is expected to be transferred to the military for management on February 2. Another Leishenshan Hospital is also under construction. Photo: Sina Weibo.”

China has been racing to contain a new strain of coronavirus which originated in Wuhan more than one month ago. At least 106 people have died since and more than 4,500 have been infected across China, AFP reported here.

The image was also shared on Twitter alongside similar claims here by People’s Daily, a Chinese state media organisation, and here by Lijian Zhao, the deputy director general for China’s Information Department and Ministry of Foreign Affairs.

The photo has been shared in a misleading context; a reverse image search on Google found the image published here on a website of a China-based import and export company on January 18, 2019.

It was published as part of a selection of images advertisting temporary structures from Hangzhou, China.

The page title reads: “Quick Installation Hotel / Office / House Collection Hall”. Below is a screenshot of the image: 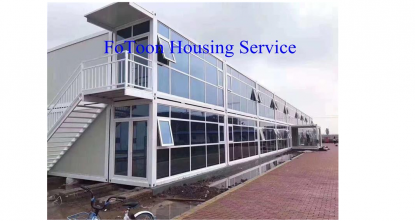 A screenshot of the image on the China-based construction website

It was also published here on another China-based construction site under the title: “Hotel Use and Container Material Prefabricated Modular Home Design”. A screenshot of the photo on another China-based construction website

It was also published here on another China-based construction site, under the title: “Modular Steel Structure Container Studio Apartments”.

Below is a screenshot of the image on Taobao: 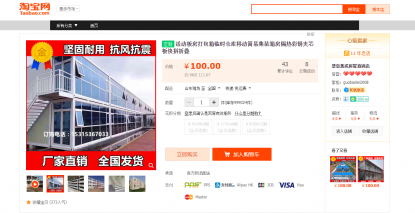 A screenshot of the listing on Taobao

Meanwhile, People’s Daily published this timelapse video on January 27, 2020 purporting to show the construction of Huoshenshan Hospital in Wuhan.

The caption states: “Timelapse video showing the 4th day of constructing Huoshenshan Hospital, a new facility providing 700 to 1,000 beds for #coronavirus patients in #Wuhan. The hospital is expected to complete on Feb 2.”

AFP journalists visited the site on January 27, 2020 and found “the outline of a floor began to take shape and electrical switchboards were already up,” as reported here.

The report states: “It is one of two makeshift hospitals that Chinese authorities are rushing to build within a fortnight in the city of 11 million people to relieve medical facilities swamped with patients waiting for hours to see doctors.”