A photo of a fleet of blue lorries bearing the image of Sri Lankan Prime Minister Mahinda Rajapaksa has been shared repeatedly on Facebook and Twitter alongside a claim that the lorries were distributing food during the novel coronavirus curfew. The claim is misleading; the photo in fact shows lorries that were used in a political initiative in 2014, more than five years before the coronavirus pandemic. Rajapaksa’s office also denied the claim, saying that authorities are pursuing legal action against those spreading the “false information”.

The photo was published on Facebook here on March 25, 2020. Next to the image of Rajapaksa, the lorries in the photo also feature the logo of Sathosa, a state owned retailer. 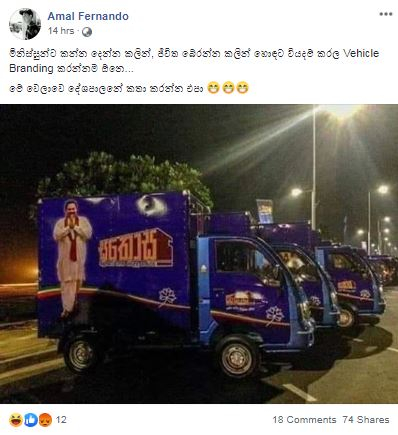 The post’s Sinhala-language caption translates to English as: "Before feeding people and saving lives, one must spend well on branding… Don’t talk about politics in this time".

The post was published the same day that the government announced Sathos would join other supermarket chains to deliver groceries during the nationwide curfew implemented to contain the spread of the novel coronavirus.

The same image was shared on Facebook  here, here and here and on Twitter here with a similar claim.

The photo actually shows lorries that were used in 2014 in a distribution campaign organized by Rajapaksa, who was then serving as president. Other photos of the same fleet were published here on December 4, 2014 by Sri Lanka's Daily Mirror newspaper, in an article headlined “Sathosa lorries carry MR image”.

The lorries in the misleading post’s photo and the Daily Mirror’s photos both show identical branding and bear the logo of Mahinda Chinthana, Rajapaksa’s former election manifesto. The manifesto’s multi-coloured ribbon and lotus blossom logo was discontinued from use following Rajapaksa’s failed presidential bid in 2015.

Below is a comparison of the images with the specific branding marked by AFP:

Comparison of the images with the specific branding marked by AFP

Rajapaksa’s media secretary, Wijayananda Herath, denied the claim that branded Sathosa vehicles were being used to deliver goods during the coronavirus curfew.

“These false claims were brought before the attention of the PM yesterday. PM’s lawyers lodged a complaint with the Colombo Crimes Division so that legal action can be pursued against those who attempt to disrupt the programs devised by the government during the coronavirus crisis using false information,” Herath told AFP by phone on March 26, 2020.