This photo shows a Swedish warship

Facebook posts which claim it shows a camouflaged Dutch minesweeping vessel that evaded Japanese capture during World War II. The claim is misleading: the Swedish Navy said the photo shows an old model of its Göteborg-class destroyer; the Netherlands Marine Museum said the ship was not a “Dutch naval vessel”.

It has been shared more than 190 times after being shared in a Facebook group with more than 150,000 members. 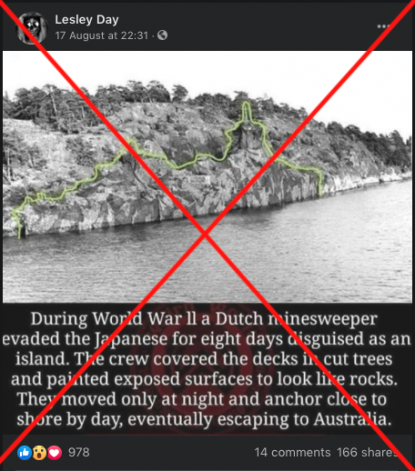 The text underneath the image reads: “During World War II a Dutch minesweeper evaded the Japanese for eight days disguised as an island. The crew covered the decks in cut trees and painted exposed surfaces to look like a rock. They moved only at night and anchor [sic] close to shore by day, eventually escaping to Australia.”

The image was also shared on Facebook here in May 2020, and previously in 2019 here, here and here alongside a similar claim.

A reverse image search on Google found the image was shared in a military forum here alongside a claim it shows a Swedish destroyer.

In response to the misleading posts, a spokesperson for the Swedish Navy told AFP in an email on August 19 that the ship featured in the misleading meme “is a Swedish vessel” which resembles a Göteborg-class destroyer.

“It’s the right length, width and has the right signature,” the spokesperson said. “This means that it must be one of the vessels: HSwMS Göteborg, HSwMS Stockholm, HSwMS Malmö, HSwMS Karlskrona, HSwMS Gävle or HSwMS Norrköping. The picture must be taken during the time 1936 to 1950, after that they were rebuilt and the signature (marking) was changed.”

The misleading posts refer to a Dutch minesweeper that successfully escaped Japanese capture during WWII. This could refer to HNLMS Abraham Crijnssen, a Royal Netherlands Navy (RNN)’s minesweeper in operation between 1937 and 1943.

The Abraham Crijnssen is part of a museum fleet at the Dutch Navy Museum in Den Helder, Netherlands.

In response to the misleading posts, a museum spokesperson told AFP by email on August 25 that the image “is not the Hr.Ms. Abraham Crijnssen or another Dutch naval vessel”.

The Royal Australian Navy (RAN) states here that in 1942, Abraham Crijnssen and several other ships fled for Australian from the Dutch East Indies, now Indonesia, as the Japanese advanced.

A photo of Abraham Crijnssen from the Australian War Memorial can be seen below. 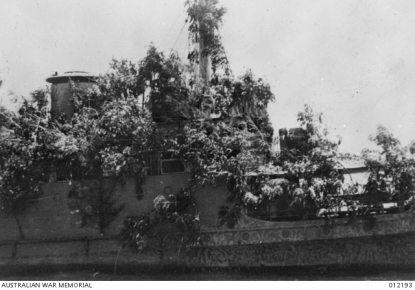 A photo of Abraham Crijnssen published by Australian War Memorial.

The photo, dated 1942, was published with the caption: “The camourflaged [sic] navigation bridge and funnel of the Netherlands Man-of-War, Abraham Crijnssen, covered with tropical foliage, made her way through the narrow passage of the Netherlands East Indies (NEI) on her way to Australia. The ship reached Australia, escaping overwhelming enemy forces.”