The image features a photo of President Gotabaya Rajapaksa and Prime Minister Mahinda Rajapaksa alongside a photo of a consignment of produce recently exported via Sri Lanka’s Mattala International Airport.

The Sinhala-language text superimposed on the image translates to English as: “First consignment of locally grown vegetables and fruits to America today. A successful beginning! Cheers!" 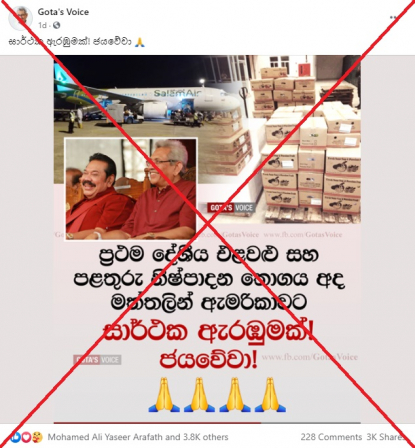 A similar claim was also made on Facebook here and here.

Upali Kalansooriya, Mattala's chief airport manager, and Ravi De Silva, the assistant manager of airport operations (cargo), told AFP that the consignment exported on August 16 was sent to Muscat, the capital of Oman.

“The consignment of perishables weighing 3371 kgs were exported to Muscat, Oman on August 16, 2020 via Salam Airways,” De Silva told AFP by phone on August 18.

He said a consignment of local garments was exported to the US ten days before the Muscat consignment was transported.

Here is a report by Sri Lankan news site Newswire published on August 16 about the export of fruit and vegetables to Oman.