A photo has been shared thousands of times in multiple posts on Facebook which claim it shows stones tied up by the Prophet Mohammed 1400 years ago. The claim is false; the photo shows a sculpture created by an Egyptian artist for Cairo International airport in 2008.

The photo was published here on Facebook on 19 December 2015.

The Urdu-language caption translates to English as: “These stones were tied by prophet Mohammed Peace be Upon Him 1400 years ago, till today they are still standing the same, if your heart allows then share by saying Glory to God.” 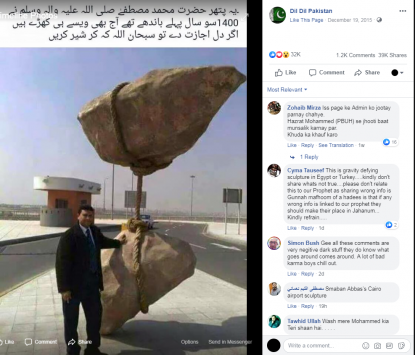 The photo has also been shared here and here with a similar claim.

The claim is false; the photo shows a sculpture created by an Egyptian artist for Cairo International airport in 2008.

This photo taken by photo agency Alamy shows the installation at Cairo International airport in Egypt. 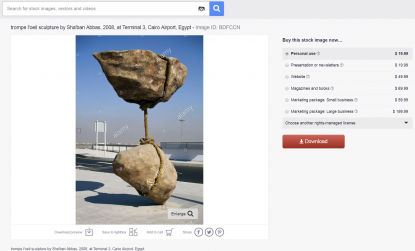 A screenshot of the photo

Sha’ban Mohamed Abbas is an award winning contemporary sculptor who died at the age of 41 on November 17, 2010.

Here is a report about his death published by Eygptian newspaper Al-Ahram on November 18, 2010.

According to this page on the Egyptian government’s official website for fine art, Abbas’ artwork can be found in various museums in Egypt, including Museum of Modern Egyptian Art  in Cairo, New Cairo International Airport and the Garden Museum at Gezira Art Center - Cairo.

A similar photo of the installation was published in this online magazine in March 2017. 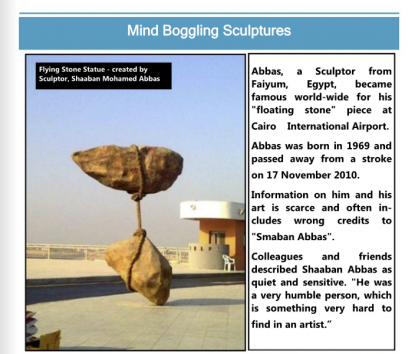 A screenshot of the photo