A graphic image of a bloodied man has been shared thousands of times in multiple posts on Facebook which claim it shows a Sri Lankan ruling party supporter who was shot by an opposition parliamentarian’s bodyguards. This claim is false; the photo shows a man who took part in an emergency response drill in Sri Lanka; police told AFP two of the opposition parliamentarian’s bodyguards were arrested after shooting two people on November 6 but neither victim was seriously injured.

The photo was published here on Facebook on November 6, where it has been shared more than 700 times.

It shows an image of a bloodied man on the left next to an image of Sri Lankan opposition parliamentarian S.B. Dissanayake on the right. 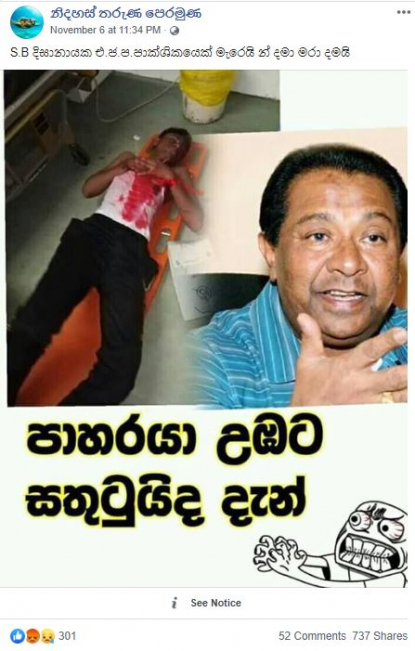 The Sinhala-language text superimposed on the image translates to English as:

“Bastard are you happy now”.

The Sinhala-language caption translates to English as: “S.B. Dissanayake deploys thugs and kills a UNP supporter”.

The United National Party (UNP) has had the majority representation in the ruling party coalition in Sri Lanka since 2015.

The same photo was shared on Facebook here and here with a similar claim.

The claim is false; the image actually shows a man who participated in an emergency response drill in Sri Lanka.

A Google reverse image search of the image found this Facebook post published on November 6, 2019,  by a local news page, Breaking News Monaragala, which reports on provincial affairs in Moneragala -- a town located in Sri Lanka’s Uva province. 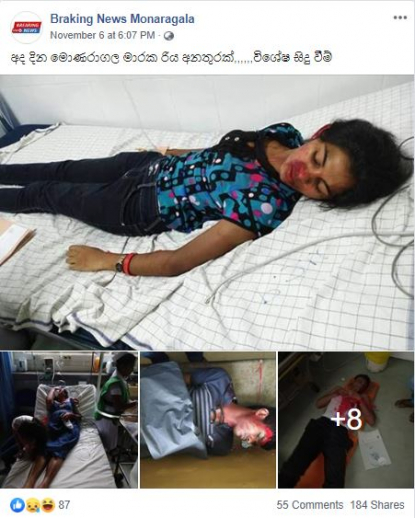 The post’s Sinhala-language caption translates to English as: 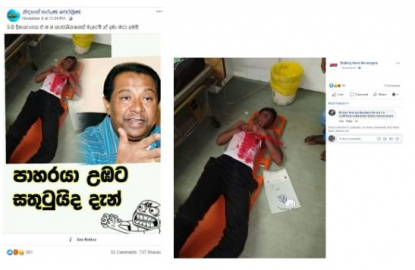 The page administrator for Breaking News Monaragala, W. M. Sisira Kumara, told AFP by phone  on November 7 that the images were taken during an emergency response drill on November 6.

“These images are of an emergency response drill staged at the Moneragala town vocational training center on the morning of November 6, 2019,” he said. “The bloodied individual seen in the image, was not injured; he was playing the part of an injured person complete with red paint to resemble blood.”

Separately, two of Dissanayake’s bodyguards were reported to have shot two people on the evening of November 6 in Ginigathena after their vehicle allegedly blocked Dissanayake’s convoy.  Ginigathena is a small town in Sri Lanka’s Central province.

According to this report by Sri Lankan news site Daily News published on November 7, 2019, the group had been returning from a wedding when they came across MP Dissanayake’s convoy.

Sri Lanka police told AFP on November 8 that two people were injured in a shooting in Polpitiya, Ginigathena at about 7.30pm on November 6, 2019. Two bodyguards were arrested and remanded in custody over the alleged shooting, which left two people hospitalised for minor injuries, the police said, adding that no fatalities were reported.