A photo from the funeral of a recently deceased Sri Lankan politician, Arumugam Thondaman, has been shared thousands of times in multiple Facebook posts. The posts claim the image shows one of Thondaman’s daughters violated Sri Lanka's mandatory coronavirus quarantine policy for travelers by attending the ceremony shortly after returning to the country from overseas. The claim is false; the image shows Thondaman’s other daughter, who resides in Sri Lanka and did not travel from abroad to attend the funeral.

The post's Sinhala-language caption translates to English as: “Our own brothers and sisters who worked hard to earn dollars are dying.

“This woman has returned from abroad, no quarantine laws applied, straight to the funeral

“Two laws in the same country”. 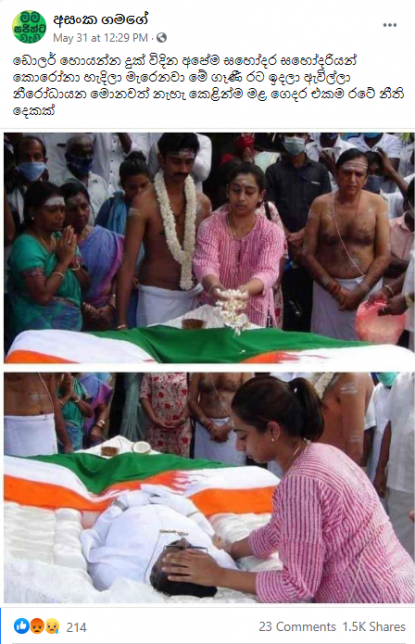 The post refers to Thondaman’s first daughter Nachiar Thondaman, who resides in Oman.

The same photo was shared alongside a similar claim on Facebook here, here, here and here.

The woman featured in the image is in fact Viji Thondaman, the late politician's other daughter who did not travel from abroad to attend the funeral on May 31, 2020.

“The claim made in these posts are false," Thondaman’s son Jeevan Thondaman told AFP by phone on June 2, 2020.

"This is my sister Viji who resides in Sri Lanka. She was alongside me throughout events in Colombo as well, held to pay respects to my late father,” he said.

Jeevan added: “My older sister Nachiar, who resides in Oman, returned to Sri Lanka the day after my father’s death. But she never got to attend the funeral due to the mandatory quarantine process."

Mathan A P, the editor of the Tamil Mirror, covered the funeral proceedings for his Tamil-language newspaper and also confirmed that the photo shared in the misleading posts shows Viji -- not Nachiyar.

“Only his son Jeevan and the second daughter Viji attended the event on May 31 and this picture is of Viji,” he told AFP by phone on June 2, 2020.

Below is a screenshot comparison of the image in the misleading posts (L); and a photograph of the two daughters, with Viji on the right (R):

Image in misleading posts is of late Minister Thondaman's other daughter Viji, seen to the right of this photograph.