A photo has been shared thousands of times in multiple posts on Facebook and Twitter in December 2020 alongside a claim that it shows Sikh farmers participating in anti-government protests in India. The posts were shared as farmers in India demonstrated against new agricultural laws. The claim is misleading; the photo actually shows Indian Sikhs staging an anti-government protest in August 2019.

The photo was published on Facebook here on November 29, 2020. 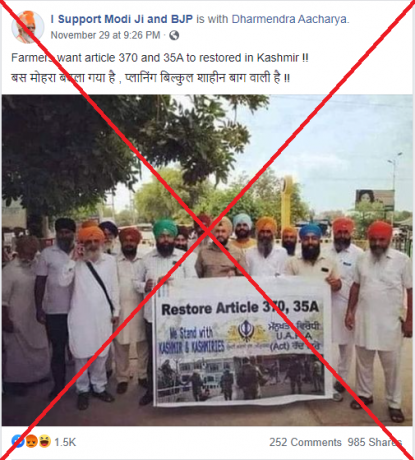 The post’s Hindi and English-language caption translates to English as: “Farmers want article 370 and 35A to restored in Kashmir. Only the pawn has changed, but the planning is absolutely the same as it was at the Shaheen Bagh.”

The misleading post was shared as farmers in India demonstrate against new agricultural laws and block key highways on the outskirts of the capital. Here is an AFP report on the issue.

Article 370 and 35A refer to the special arrangement in the Indian constitution that granted semi-autonomous status to India’s northern state of Jammu and Kashmir since independence in 1947. The constitutional arrangement was revoked by the Indian government on August 5, 2019, triggering country-wide protest, as reported here by AFP.

Shaheen Bagh refers to an area in the Indian capital of Delhi where hundreds of women have staged a sit-in protest since late 2019, following the passing of the Citizenship Amendment Act (CAA). The law, which grants citizenship to non-Muslim immigrants from Afghanistan, Bangladesh and Pakistan, was criticized as anti-Muslim and sparked nationwide protests, as reported by AFP here.

A reverse image search on Google found the same photo was posted here on the Facebook page of Shiromani Akali Dal Amritsar on August 8, 2019. 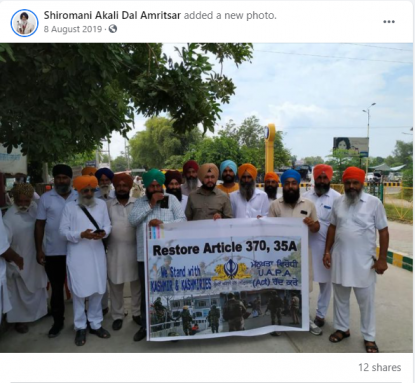 Shiromani Akali Dal (Amritsar) is a splinter group of Sikh-dominated political party Shiromani Akali Dal (SAD) led by Simranjit Singh Mann, who has vocally supported decades-old demand of Khalistan -- a separate country for Sikhs -- and opposed the abrogation of Article 370, as reported here, here and here.

The group held protest demonstrations in the north Indian cities of Amritsar and Srinagar against abrogation of Article 370, as reported here and here  from August to September 2019.