This photo shows an Indian politician celebrating Diwali in 2019, before the coronavirus pandemic

The photo was published on Facebook here on November 18, 2020. 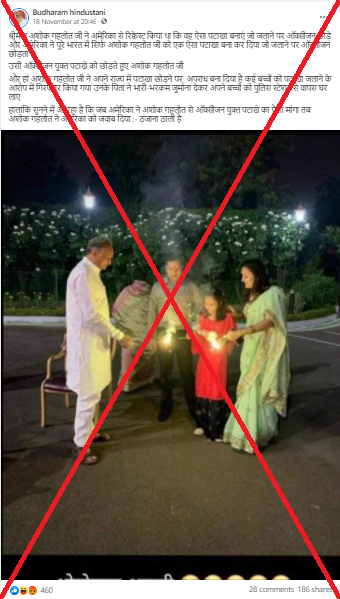 Ashok Gehlot, a prominent figure in India’s main opposition Indian National Congress party, announced in early November 2020 that Rajasthan would ban the use of firecrackers in Diwali celebrations in a bid to limit air pollution during the Covid-19 pandemic.

The decision by Rajasthan and other state governments drew criticism from the ruling Bharatiya Janata Party and Hindu hardliners who claimed the ban was anti-Hindu.

A reverse image search on Google found the photo was published on Gehlot’s verified Instagram account here on October 28, 2019, several months before the Covid-19 pandemic began. He shared it more than one year before the ban on fireworks was implemented.

Diwali -- the Hindu festival of light and prosperity -- was celebrated on October 27 in 2019.

“Worshipped mother Lakshmi with family on the occasion of Diwali,” the Hindi tweet reads.