An image has been shared repeatedly in multiple Facebook posts which claim it shows Hong Kong protesters who caused a train derailment in the city on September 17, 2019. The image is being shared in a misleading context; it shows protesters on a different rail line on August 5; the cause of the derailment remains under investigation by Hong Kong's rail authority but there was no immediate suggestion of foul play.

The image was published here on Facebook on September 17, 2019, the same day a trail derailed near Hung Hom station, Kowloon.

The accident happened on the East Rail Line during the morning rush hour, leaving eight people injured. The cause of the derailment was under investigation, AFP reported here, but there was no immediate suggestion of foul play. 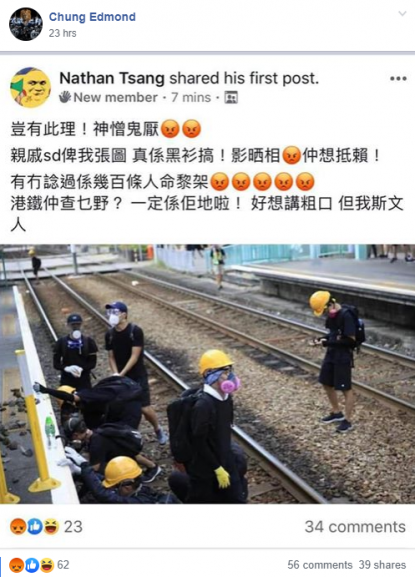 The image was published in a Facebook group with more than 15,000 members.

The traditional Chinese language text superimposed on the image translates to English as: “Absurd! Most hateful.

“This photo sent to me by my relatives shows it was indeed caused by the black shirts! They are still trying to deny it even after being captured on camera!

“Have they considered the hundreds of lives involved? What else does the MTR need to investigate? It’s definitely them! I really want to swear but I’m not going to as I’m a gentle person”.

Black t-shirts have become the signature clothing worn by pro-democracy protesters in Hong Kong, as explained in this AFP report.

The same image was published here, here and here with a similar claim in Facebook groups with thousands of members.

The image is being shared in a misleading context; it shows protesters on a different rail line on August 5, 2019.

The photo's caption translates to English as: “Protesters in Tin Shui Wai jumped into Light Rail tracks and picked up stones.”

Tin Shui Wai is a station in the northwest of Hong Kong on the West Rail Line.

Below is a screenshot comparison of the image in the misleading post (L) and the HK01 image (R):

Almost 150 people were arrested in Hong Kong on August 5 during a general strike and clashes between police and pro-democracy protesters, AFP reported here on August 6.

On the MTR railway map shown below, AFP has circled Tin Shui Wai station in northwest Hong Kong, and Hung Hom station, where the derailment on September 17 happened: A screenshot of the MTR railway map