An image of two boxes of the same muscle relaxant with wildly different price tags has been shared thousands of times in multiple posts on Facebook. The posts claim the image is evidence of price gouging under the current government in Pakistan. The claim is misleading; both boxes show a manufacture date that predates the current government; the pharmaceutical company which produces the drug seen in the image said the higher price tag had been doctored.

The photo was published on Facebook here on July 18, 2020. It was shared more than 7,200 times before it was deleted.

The post’s Urdu-language caption translates as: ““Look at the atrocity of PTI folks”.

PTI is acronym for the ruling Pakistan Tehreek-e-Insaf political party, which is headed by Prime Minister Imran Khan and came into power in August 2018. 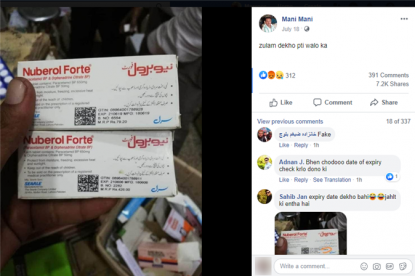 Below is a magnified cross section of the photo to show the printed information clearly: 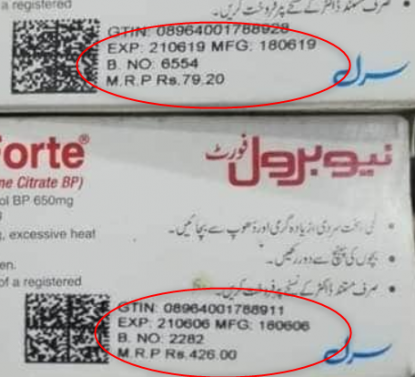 The manufacturing date stamp on the boxes -- June 2018 -- predate the current PTI administration, which came into office in August 2018.

A sales officer for Searle, the pharmaceutical company that manufactures Nuberol Forte, also said that the photo had been digitally manipulated.

“I can confirm that Nuberol Forte was never priced 426 rupees,” the officer, Tahir Mubeen, told AFP by telephone on July 21, 2020. “The price info on the box has been doctored. We keep on seeing such fake news on social media and are aware of it.”

Prices of a particular drug are regulated by the government across Pakistan. This document published by Pakistan's Drug Regulatory Authority on July 15, 2020 stipulates that revised prices must be approved by the authority.