This photo of rivers that 'never mix' was taken in Georgia, not in DR Congo

An image of two rivers that “meet but never mix” has been shared hundreds of times on Facebook alongside the claim that the picture was captured in the Democratic Republic of Congo. The claim is false; the photo shows a river in Georgia.

The picture captures two streams of different colours, one light gray and the other a darker shade, flowing parallel to each other at the foot of a small mountain in a lush green landscape. 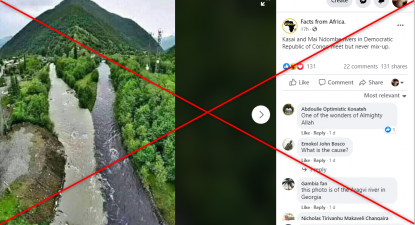 A reverse image search indicated that the claim has been circulating online since 2019 on Twitter (here and here) and Facebook (here, here and here).

All the posts purport that this shows the Kasai and Mai-Ndombe rivers in DR Congo. 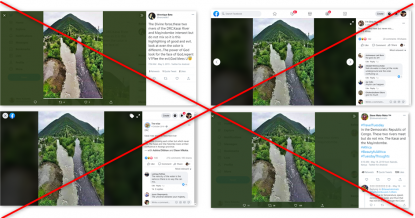 Not in DR Congo

Pax Mbuyi Mucici, a geographer at the Geographical Institute of Congo, told AFP Fact Check that “there is no Mai-Ndombe river (...) but rather a lake”.

Lake Mai-Ndombe, which was formerly referred to as Lake Leopold II, means “black water” in the Lingala language.

Mucici added that Lake Mai-Ndombe does not directly flow into the Kasai river.

“The waters of Lake Mai-Ndombe are channelled by the Fimi River, which intersects with the Kasai River in Mushie territory,” Mucici said. 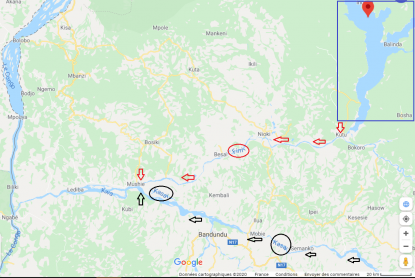 While there is no mention of a Mai-Ndombe river on any online maps, some offline maps mention a river by that name near the capital Kinshasa. Circled in yellow on the map below, it flows into the Lufimi river; however, at no point does it meet the Kasai river (circled in black). 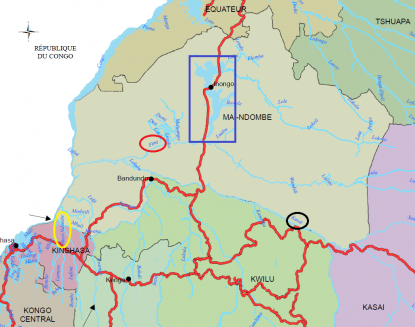 Léon Lundula, a geographer with the National Pedagogical University of Kinshasa, said that the landscape seen in the photo did not make any sense. “These rivers are not in mountainous areas,” Lundula said.

Some online users also challenged the photo’s alleged location of DR Congo, with one commenting that the photo showed the Aragvi river in Georgia.

A search of the keywords “Aragvi river” on Google reveals an article from itinari.com, which describes itself as a platform for travellers “looking for the best-kept spots and hidden gems”.

The article, titled: “The most spectacular rivers of Georgia”, describes the Aragvi river at length.

A screenshot of an article about the Aragvi river, taken on October 9, 2020

“There are two types of Aragvi: Black and White. They meet with each other near the village Pasanauri and you can see clearly the difference in the colors. Some people compare it with yin and yang. After some distance, the river gradually mixes with each other and become (sic) one colour, which is later connected with Mtkvari near the Mtskheta city,” the author writes.

Pasanauri is located 90 kilometres north of the Georgian capital Tbilisi. On Google Maps, images similar to the one from the Facebook posts are associated with the town (marked in red below). 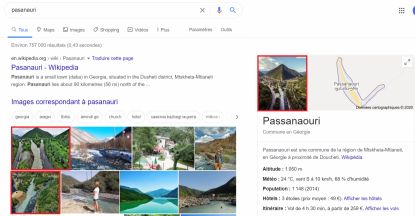 A screenshot of the results from a Google search for the town of Pasanauri, taken on October 12, 2020

Google Maps offers a view of the site dated June 2019. AFP Fact Check compared it to the photo from the Facebook posts, and the elements match: notice the streams of two colours meeting below the same small mountain, as well as antennas with white parabolas on the right side of the river. 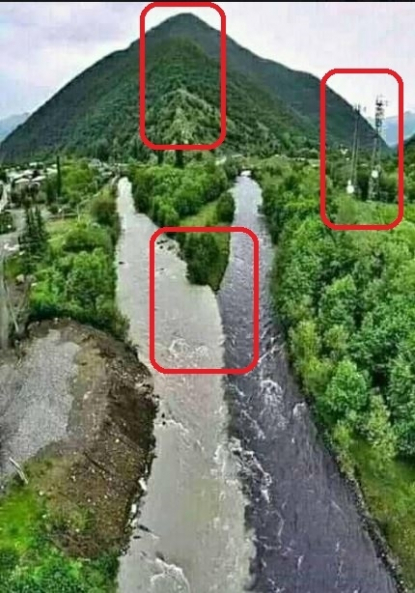 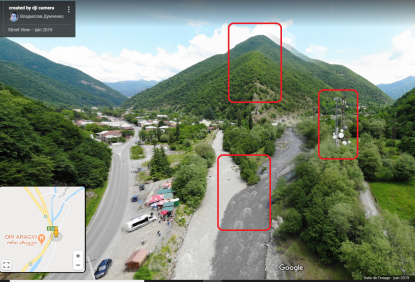 A screenshot of Aragvi river on Google Maps, taken on October 9, 2020

We also found videos of the Aragvi river on YouTube here and here.

“The waters (of the Aragvi) have different chemical compositions and density,” Anano Chikhradze, the author of the itinari.com article, told AFP Fact Check.

While the photo shared on Facebook was not taken in DR Congo, this natural phenomenon does occur there, too.