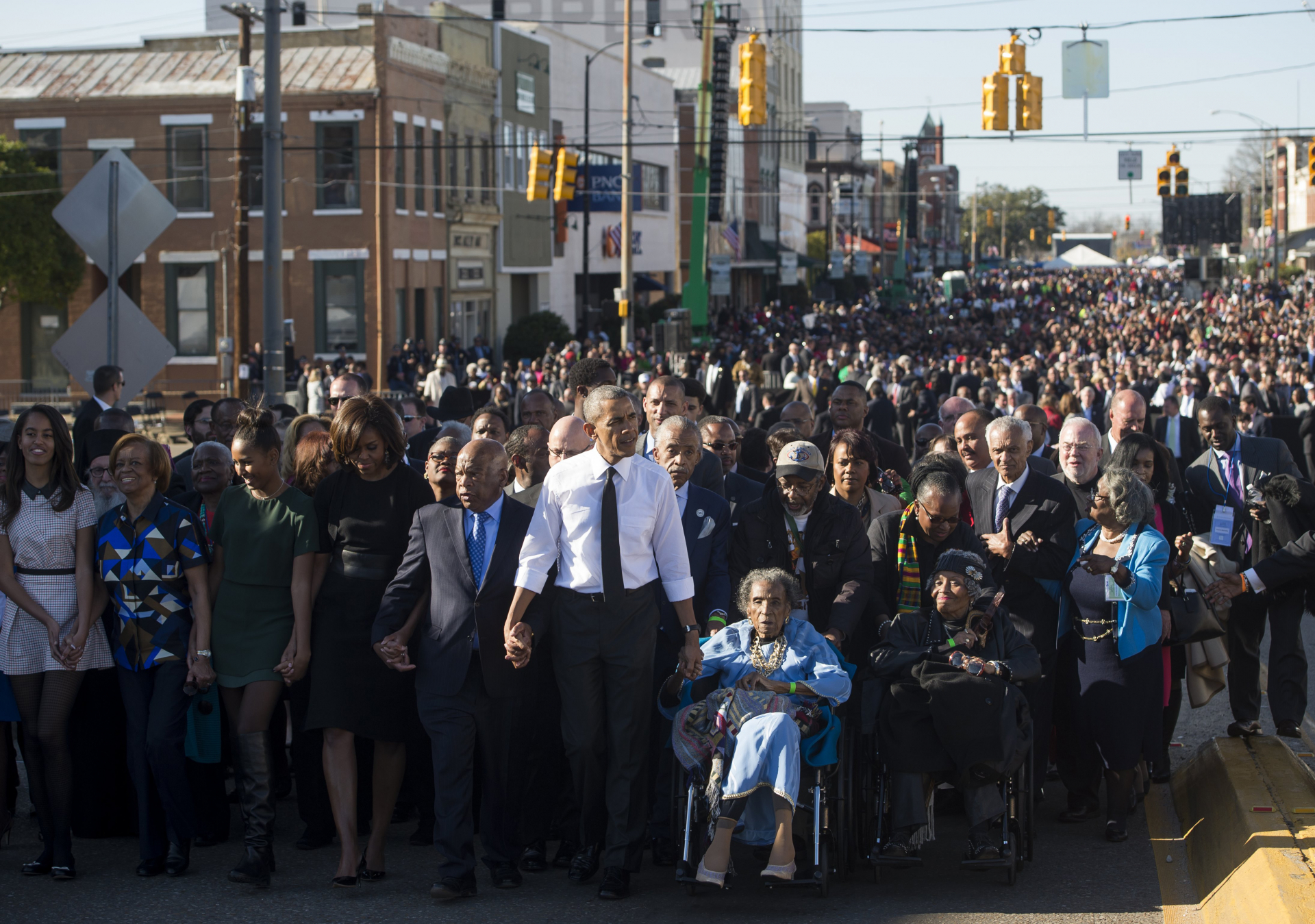 This photograph was taken in 2015 by an AFP photographer. It shows Barack Obama at a commemoration marking the 50th anniversary of the Selma to Montgomery civil rights marches. Other photos of this scene have been shared out of context. (AFP / Saul Loeb)

An image showing Barack Obama standing in front of a crowd has been shared hundreds of times in Facebook posts, linking the former US president to anti-racism protests sparked by the police killing of George Floyd, a 49-year-old African American man. His death last month has sparked widespread demonstrations in the United States. However, the photo has been shared in a misleading context. It was taken in 2015, during the commemoration of the 50th anniversary of the Selma to Montgomery civil rights marches.

The claim that this photo was taken during the recent protests has spread across numerous Facebook accounts in Nigeria, including this page called “George Udom” with nearly 200,000 followers. The image shows Barack Obama and his family holding hands while standing in the front row of a crowd.

“Former President Obama Leading the protest against the killing of blacks,” reads the caption on the Facebook post published on June 3, 2020. 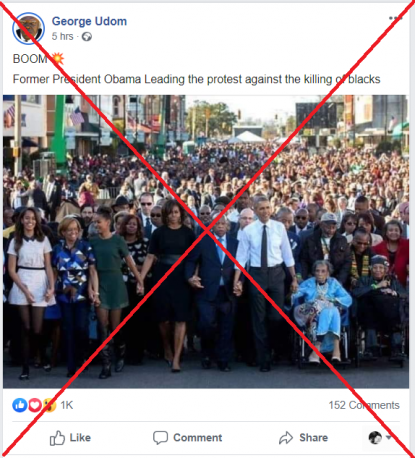 While many users accuse Obama of failing to address racist killings during his time in office, others raise concerns about a lack of safety measures against the spread of coronavirus. 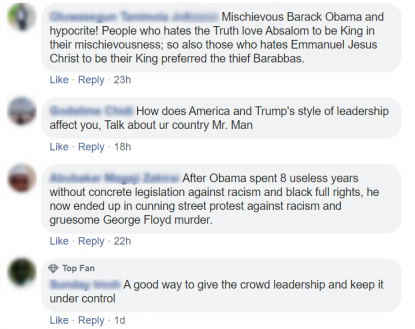 The photo has also circulated in other parts of Africa alongside a similar claim. We have archived some of the posts here in Cameroon, here (in French) in Ivory Coast and here in Angola.

The posts emerged in the wake of reignited anti-racism protests after Floyd, 46, was filmed pleading for his life as a white police officer kneeled on his neck for more than eight minutes in the city of Minneapolis, Minnesota.

It is the latest protest in the Black Lives Matter movement, launched in 2013 to demand an end to police brutality and racism.

Although Obama spoke out after George Floyd’s death, the former US president is yet to participate publicly in the protests, as of June 5, 2020.

The photo of him walking in front of a crowd has been circulating online since 2015, during the Obama administration.

A Google reverse image search led to the website of the Obama White House, an archive of the Obama administration. The picture features in a 2015 web publication headlined: “President Obama Marks the 50th Anniversary of the Marches from Selma to Montgomery”. 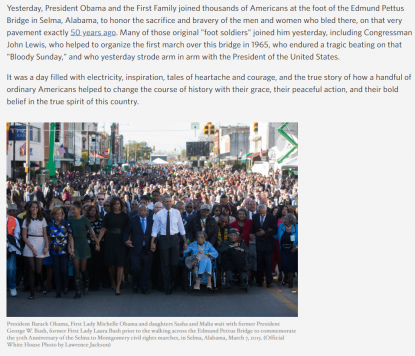 A screenshot taken on June 3, 2020, showing the web publication

According to the report, the image was shot by official Obama White House photographer Lawrence Jackson on March 7, 2015. 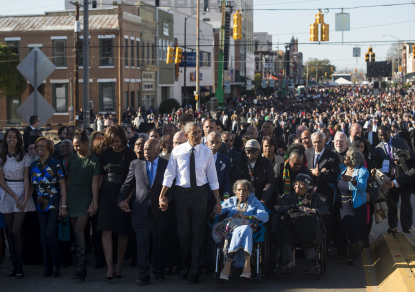 This photograph was taken in 2015 by an AFP photographer. It shows Barack Obama at a commemoration marking the 50th anniversary of the Selma to Montgomery civil rights marches. Other photos of this scene have been shared out of context. (AFP / Saul Loeb)

The photos show Obama and his family shortly before they walked across the Edmund Pettus Bridge in Alabama to commemorate the 50th anniversary of the Selma to Montgomery civil rights marches.

Obama himself tweeted the picture in March 2020, five years after it was taken and 55 years after the civil rights marches.

55 years ago, when a group of civil rights organizers crossed the Edmund Pettus Bridge, they carried America with them. Today, let's honor that legacy by continuing their work to protect and exercise our foundational right to vote. pic.twitter.com/zhMeTA3kFj

Obama said last week he shared the "anguish" of millions of Americans and that racism cannot be “normal” in the US. "If we want our children to grow up in a nation that lives up to its highest ideals, we can and must do better," he said.

The former president also took to his official Twitter account to show support for the protests following Floyd's killing, which have now moved beyond the US to other countries around the world.

As millions of people across the country take to the streets and raise their voices in response to the killing of George Floyd and the ongoing problem of unequal justice, I’ve heard many ask how we can sustain momentum to bring about real change.

"The protests represent a genuine and legitimate frustration over a decades-long failure to reform police practices and the broader criminal justice system. We should condemn the few who resort to violence – not the overwhelming majority who deserve our respect and support," he wrote.