A photo has been shared hundreds of times on Facebook and Twitter alongside a claim it shows a road lined with potholes in a district in the southern Indian state of Kerala where opposition politician Rahul Gandhi has served as member of parliament since May 2019. The claim is false; this photo has circulated in reports about the north Indian state of Bihar since at least 2017.

The photo was published here on Facebook on July 7, 2020. It has been shared more than 500 times. 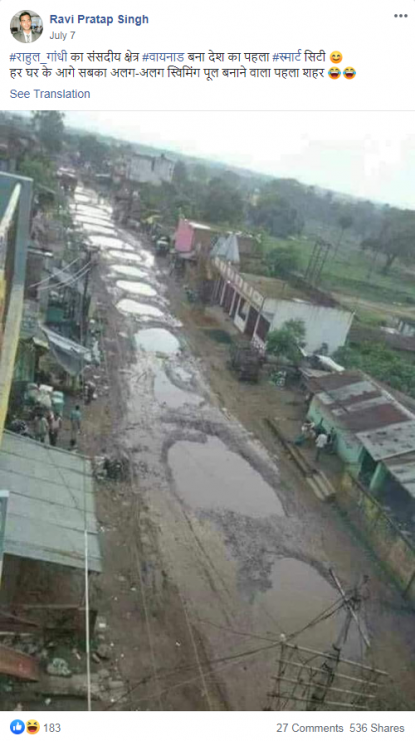 The post’s Hindi-language caption translates to English as: “Rahul Gandhi’s parliamentary constituency Wayanad has become the first smart city of the country. It has swimming pools in front of all the houses.”

Rahul Gandhi is an Indian politician who has served as the member of parliament for the constituency of Wayanad in Kerala since May 2019. He was also the president of the Indian National Congress party between 2017 and 2019. 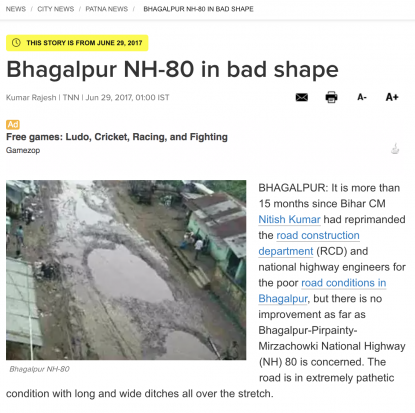 The report reads in part: “It is more than 15 months since Bihar CM Nitish Kumar had reprimanded the road construction department (RCD) and national highway engineers for the poor road conditions in Bhagalpur, but there is no improvement as far as Bhagalpur-Pirpainty-Mirzachowki National Highway (NH) 80 is concerned. The road is in extremely pathetic condition with long and wide ditches all over the stretch.”

NH-80 is a highway in Bhagalpur area of the north Indian state of Bihar.

Below is a screenshot comparison of the photo in the misleading Facebook post (L) and the Times of India photo (R):

The poor road conditions in Bihar were also reported by Indian media, including television channel ABP News here on July 3, 2017.