A photo has been shared repeatedly in multiple posts on Facebook and Twitter which claims to show gift bags distributed to Muslims during the holy month of Ramadan by India’s Telangana state government during the coronavirus pandemic. The claim is false, this photo has circulated online since at least 2015; Telangana’s chief minister has announced it will not distribute Ramadan gifts this year due to the COVID-19 outbreak. 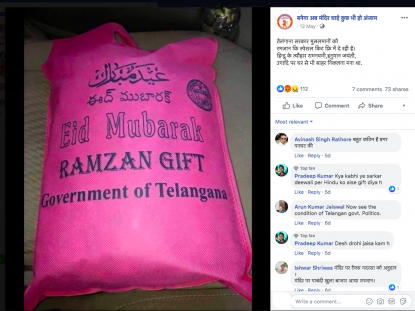 The post’s Hindi-language caption translates to English as: “Telangana government is distributing free gifts to Muslims during Ramzan. They didn’t do the same during Hindu festivals.”

Ramzan is another word for Ramadan, the ninth month of the Islamic calendar, recognised as the holy month of fasting.

The claim is false; the photo has circulated in media reports since at least 2015. The Telangana state government has said it will not hold its annual Ramadan gifting event while the nationwide coronavirus lockdown is in place.

A reverse image search on Google found the same photo published in this July 9, 2016 report by the Indian news website Aajtak.

The Hindi-language headline translates to English as: “Telangana government to distribute gifts to nearly 2 million poor Muslim families in Ramadan”. 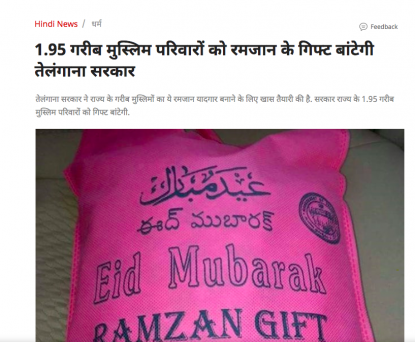 (A screenshot of the Aajtak report))

The event was also reported by other local media, including The Hindu here and iChowk.in here.

This year, chief minister Kalvakuntla Chandrashekar Rao announced there will be no such packages distributed to Muslims for Ramadan, as the nationwide lockdown over the novel coronavirus continues.

At the one-hour 39-minute mark of this video posted to the Telangana local government’s official Facebook page on May 5, 2020, he says: “As people will touch the bags with their hands and there is a chance for coronavirus to spread, government will not be distributing Ramzan gifts for this year.”

Telangana has also previously distributed ‘gifts’ in a similar manner to mark other religious festivals, such as Christmas and Bathukamma, the Hindu festival of flowers.

Local media reports from 2019, including this article by the Times of India and this by Hindustan Times shows hundreds aid packages were distributed on Christmas and Bathukamma celebrations by the state government that year.