A photo showing a group of women appearing to tend to an injured man in a wooded area has been shared hundreds of times in multiple Facebook posts alongside a claim it shows a journalist from the Philippine broadcasting network ABS-CBN “protecting” communist rebels. The claim is false; the photo has circulated in media reports since 2013 about a safety training session for female journalists in the Philippines; the local news website that first published the photo issued a statement denying the claim, saying the photo was being used “maliciously”.

It is part of a collage of three photos; the other two show journalist Rowena Paraan, the head of the “Bayan Mo, Ipatrol Mo” citizen journalism project at Philippine’s biggest television network, ABS-CBN. 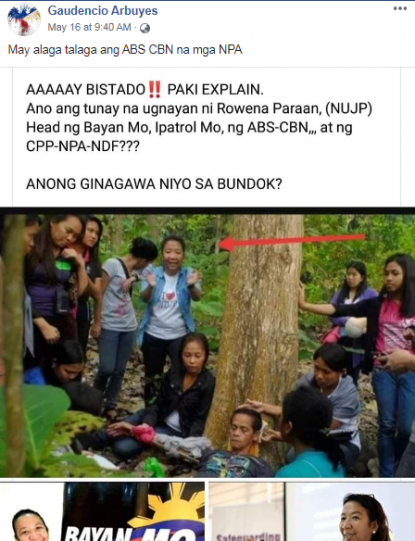 A screenshot of the misleading post taken on May 18, 2020

The Tagalog text overlay in the collage translates to English as: "AAAAAY BUSTED !! PLEASE EXPLAIN. / What is the real link between Rowena Paraan, (NUJP) Head of Bayan Mo, Ipatrol Mo, of ABS-CBN,,, and the CPP-NPA-NDF??? / WHAT ARE YOU DOING IN THE MOUNTAINS?"

“NUJP” is the acronym for the “National Union of Journalists of the Philippines”, a media organisation Paraan previously chaired.

“CPP-NPA-NDF” are acronyms for the communist rebellion in the Philippines: the “Communist Party of the Philippines” and its armed wing, the “New People's Army”, and its political arm, the “National Democratic Front”.

Philippines’ leading broadcaster ABS-CBN was forced to go off-air earlier this month over its stalled broadcasting licence renewal, sparking fears that the government is stifling press freedom in the country. President Rodrigo Duterte has repeatedly attacked the network in his speeches and accused it of not airing one of his campaign advertisements during the 2016 presidential election, as reported by AFP here.

A combined keyword and reverse image search on Google found the same photo published in this March 17, 2013 report by MindaNews, a Philippine media organisation based in Mindanao island. 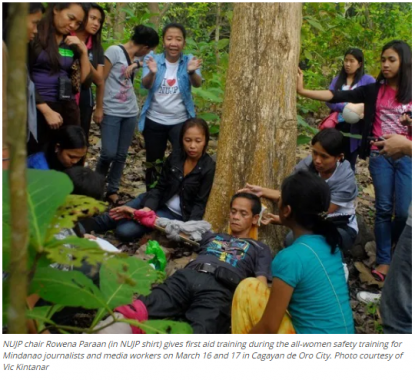 A screenshot of the photo in the MindaNews report

Below is a screenshot comparison of the photo in the misleading posts (L) and the MindaNews’ report (R):

MindaNews issued this statement on May 15, 2020, saying it “vehemently condemns” the “malicious” use of its photo in the misleading posts.

It reads in part: “A MindaNews photograph of a simulation exercise during the first aid module of the country’s first all-women media safety training in Cagayan de Oro City in March 2013 has been maliciously used to red-tag a journalist, an act MindaNews vehemently condemns.”

The NUJP also issued a statement on its website here on May 15, 2020 which states: “The National Union of Journalists of the Philippines (NUJP) condemns the malicious and deplorable use of photographs of the first all-women media safety training held in the Philippines to red-tag our former chairperson, colleagues and the NUJP.

“It is utterly shameless but dangerous that a historic media safety training aimed at protecting and ensuring the safety of media workers is being used to malign, threaten and put journalists and the NUJP in danger.”

When contacted for comment, Paraan directed AFP to this photo published on 22 March 2013 on the Facebook page of Rommel L. Rutor, a tutor who was present at the 2013 safety training exercise.

Close examination of the photo shows a group of people posed around a banner reading “First All Women RISK AWARENESS AND MEDIA SAFETY TRAINING”. It also shows Paraan and the man purportedly being tended to in the misleading posts.

Below is a screenshot of the Facebook photo, with the following circled in red by AFP: Paraan (L); the banner (C); and the man labelled as a rebel as in the misleading posts (R): 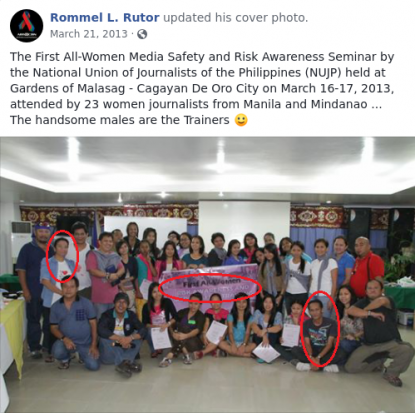