An image has been shared in multiple Facebook posts that purports to show former Philippine opposition senator Antonio Trillanes holding a card asking for public support if he decides to run for president in 2022. The claim is false; the image has been digitally altered from a photo that shows Trillanes addressing Reddit users during an online interview in 2017.

The text sign that former Senator Trillanes appears to be holding reads: "If I ran for President in 2022, can I expect your vote?" 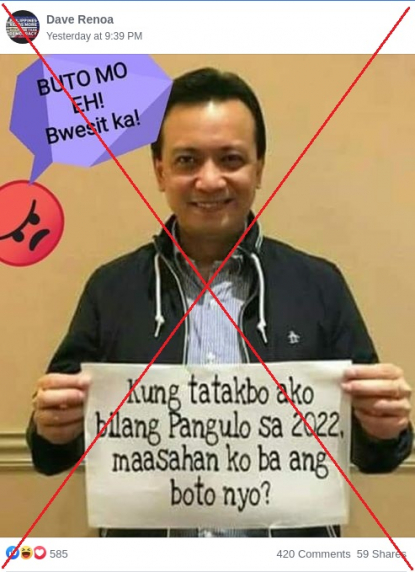 A screenshot of the misleading post taken on August 4, 2020

The claim is false; a reverse image search on Google found the text on the purported sign has been doctored.

The original was posted to Reddit here on June 22, 2017, and shows Trillanes holding a sign that reads: “See you later, redditors!”

Trillanes displayed the sign during an "Ask Me Anything (AMA)" session on the platform.

Below is a screenshot comparison of the doctored photo (L) and the photo posted on Reddit (R): 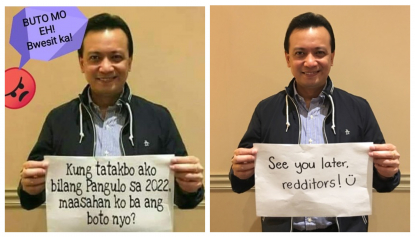 The original photo appeared in this Esquire Magazine report about Trillanes’ Reddit session.

A representative for the former senator also said the photo in the misleading posts had been digitally altered.

“We would like to inform you that the photo…  is edited/doctored,” the representative told AFP in a Viber message on August 4, 2020. “The original photo was used on his AMA.”