A photo has been shared repeatedly in multiple posts on Twitter and various forums alongside a claim it shows a protester in the US calling for Chinese support in the ongoing George Floyd protests. The claim is false; the photo has been doctored to show the protester holding a manipulated placard; the Chinese flag has also been superimposed on the image. 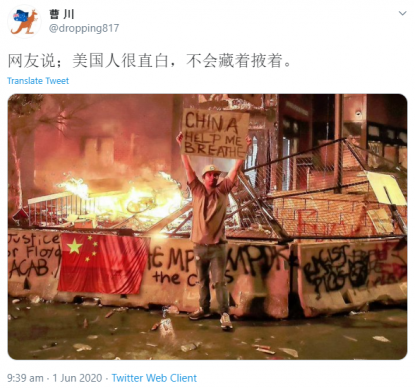 A screenshot taken on June 2, 2020, of the misleading tweet published by user @dropping817

The photo shows a man holding a “CHINA HELP ME BREATHE” sign as he stands in front of a burning building and road blockades, which has a Chinese flag attached to it. Graffiti on the roadblocks read: “Justice for Floyd”.

Protests erupted across the US following the death of George Floyd, an unarmed black man who was filmed pleading for his life as a police officer kneeled on his neck during his arrest in the city of Minneapolis. As thousands took to the streets in peaceful and violent protests calling for an end to racism, the Trump administration responded with further shows of force, such as the deployment of National Guard troops and a night-time curfew. Here is an AFP report on the demonstrations.

The tweet’s Chinese-language caption translates to English as: “Netizens say: US people are very candid, and they never hide their feelings.”

The photo has also been shared here on Twitter, here on Facebook and on various forums here, here, here and here, alongside a similar claim.

The claim is false; the photo has been doctored.

A reverse image search found the original photo published in this May 29, 2020 report by Portuguese TV channel SAPO 24. 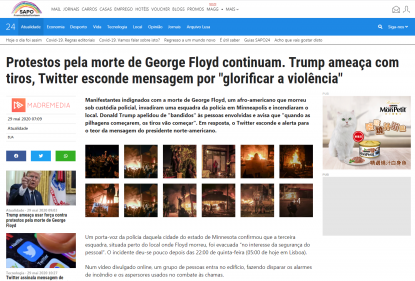 The photo can be seen in this photo gallery published alongside the report. 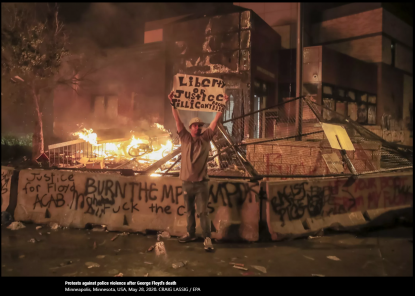 The photo, credited to Graig Lassig from international photo agency EPA, is captioned: “Protests against police violence after the death of George Floyd / Minneapolis, Minnesota USA, May 28, 2020.”

The placard in this photo reads: “Liberty or justice / till i can’t breath!!!!”. There is no Chinese flag in the original photo.