A photo of a girl reading a book as she walks past heavily armed soldiers has been shared hundreds of times in multiple posts on Facebook and Twitter which claim the image was taken in Kashmir after the Indian government revoked the region’s special status in August 2019. The claim is false; the photo was taken in 2016 during previous unrest in Jammu and Kashmir.

The photo was published here on Facebook, on a page with some 400,000 followers.

The post's caption states: “One of the best pictures taken in Kashmir after Article 370 revoked.....!”

Article 370 of the Indian constitution granted Jammu and Kashmir state autonomy. Its status was revoked by the Indian government on August 5, 2019, as described in this AFP article.

The text superimposed on the image in the misleading post states: “She knows that she is safe in Kashmir. Another strong picture from Kashmir, throw this pic on their faces who ask for Azad Kashmir.” 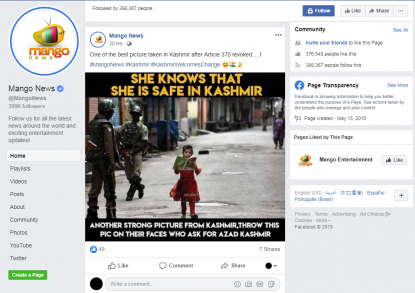 The claim is false. The photo was taken by photographer Ashish Sharma for Open Magazine in 2016 -- almost three years before the Indian government withdrew the autonomy of Jammu and Kashmir state. Here is the photo on his official website.

Sharma told AFP by text message that he took the photo on August 21, 2016, in Srinagar's old city.

Below is a screenshot comparison of the photo in the misleading posts (L) and Sharma's photo (R):

Sharma also posted a very similar photo of the same girl on his Twitter account here on August 29, 2016, with the caption: “Rawness of Innocence. #India #Kashmir #Curfew #Hope”.