A photo has been shared hundreds of times in multiple Facebook posts which claim it shows the clothes of victims of the 2019 Sri Lanka Easter Sunday bombings laid out at the church where they were attacked. The claim is false; the photo actually shows an art installation by Cuban artist collective Los Carpinteros on display at Art Basel 2012 in Switzerland.

The photo was published in this Facebook post on June 18, 2019 where it has been shared more than 1,200 times. 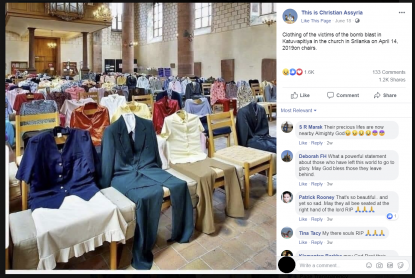 The caption states: “Clothing of the victims of the bomb blast in Katuwapitiya in the church in Sri lanka on April 14, 2019 on chairs.”

“The Easter bombings” refers to attacks on churches and hotels in Sri Lanka on April 21, 2019. Here is an AFP story about the attacks.

The same photo was published here with a similar claim on Facebook here.

This claim is false; the photo has circulated online since at least 2012 and actually shows an art installation in Switzerland.

A reverse image search for the photo on Yandex found this article published on May 10, 2012 by Fubiz, a site about art, design and pop culture.

The headline states; “150 Invisible People Installation in a Church”.

The article states the image shows an art installation by a trio of Cuban artists named Los Carpinteros.

It states: “Cuban collective Los Carpinteros designed an impressive installation titled 150 People, in a church. The installation shows 150 chairs on which are sit invisible people, in floating outfits. A funny reflection on religion and society, approached from an artistic view.”

A search on the official website for Los Carpinteros found the same photo published here about the installation in Basel, Switzerland. 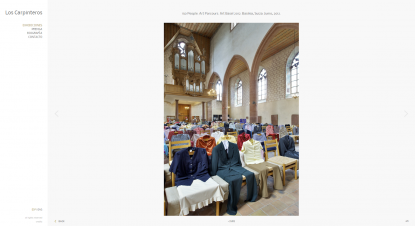 Screenshot of the art installation on Los Carpinteros site.

The installation was featured in Basel, Switzerland in June 2012, as part of a project which seeks to engage the public by putting artistic installations in urban neighborhoods.

Here is a video published on June 18, 2012 about 2012 Art Parcours Night in Basel which features the ‘150 Invisible people’ and visitors interacting with the exhibit.

The installation was exhibited at Prediger Church in Basel.

A corresponding photo of the church’s interior was tagged on TripAdvisor here in September 2016.

Below is a screenshot of the image on TripAdvisor: 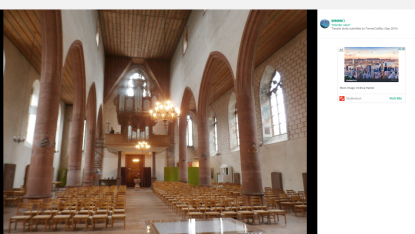 Screenshot of a photo featuring the Basel Prediger Church on TripAdvisor.