Skip to main content
Philippine Vice President Leni Robredo (C) looks up as she arrives at the House of Representatives in Manila on July 24, 2017, to attend Philippine President Rodrigo Duterte's second annual state of the nation address. (AFP / Noel Celis)

Multiple posts shared thousands of times on Facebook, YouTube and Twitter claim that Philippine Vice President Leni Robredo lied when she said she was not joined by journalists at her relief operation after Typhoon Vamco hit the Philippines in November 2020.  The posts include two photos they claim show a director and cameramen filming Robredo at the typhoon relief event. The claims were promoted by an imposter AFP Fact Check Twitter account. But the claims are false: the photos were actually taken in 2018 during Robredo’s visit to a town in Cebu.

The misleading post contains a composite image, which juxtaposes a screenshot of a report about Robredo denying that she took media with her on a Typhoon Vamco relief effort, with two images of Roberdo being filmed at what appears to be a disaster relief event.

The post’s Tagalog-language caption translates to English as: “A good Tuesday morning, Philippines! Shoutout to liars and those pretentious and superfluous people. May your conscience be stirred. Special shoutout to Mema Leni.”

"Mema" is Tagalog slang for someone who speaks nonsensical things. 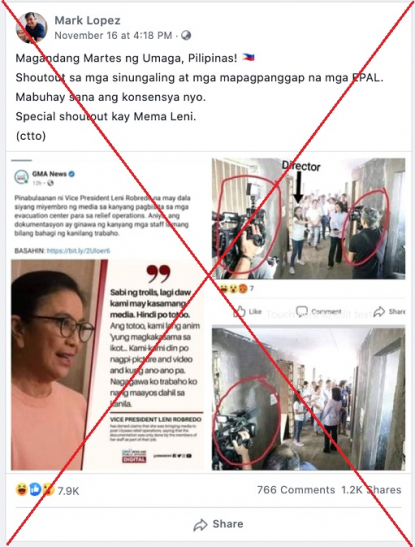 A screenshot of the misleading post, taken on December 3, 2020

The posts were published after Typhoon Vamco made landfall in the Philippines November 11, causing major flooding and leaving scores of people dead. Here is an AFP report on the disaster.

The composite image was also featured in a YouTube video here, and posted on Twitter here, and an imposter AFP Fact Check Twitter account shared the image at least four times here, here, here and here.

The screenshot in the composite image is of this November 13, 2020 Facebook post by Philippine broadcast network GMA News saying: "Vice President Leni Robredo denies she brought members of the media in her visit to evacuation center for relief operations. She says the documentation is done by her staff as part of their job."

The GMA piece is about this Facebook post on Robredo's personal account posted about her Typhoon Vamco relief work, in which she says: "Trolls say that we always bring the media. This isn’t true. In fact, it’s just the six of us together in going around... We took photos and videos ourselves..."

The second and third images in the misleading posts' collage are photos of Robredo being filmed inside a building. Two videographers are circled in the graphic and a woman gesturing in front of the vice president has been labelled “director.”

But these photos actually date from 2018.

A keyword search on Facebook found the second and third photos in the collage in this November 17, 2018 post by the public information officer of San Remigio town in the province of Cebu. The photos were taken during Robredo’s tour of the town’s mental health facility being built at the time.

Below is a screenshot comparison of the photos in the misleading post (L) and the photos published by the San Remigio information officer (R): 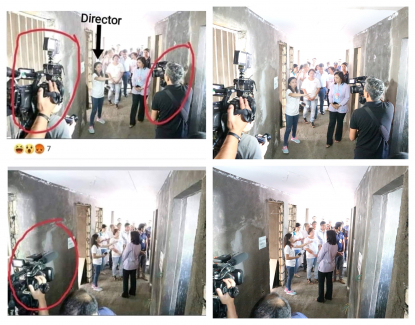 Robredo issued this statement on November 20, 2020 about the misleading posts on her official Facebook account. It reads in part: “First of all, we don’t bring members of the media to our official events. It’s possible there are media assigned to cover the Office, but only staff of the Office of the Vice President accompanies (Robredo) in (her) activities... the director being labelled (here) is a nurse who oversees the facility.”

Lutgarda Carabio, the officer in charge of the San Remigio mental health facility, told AFP by phone on December 3 that the woman described in the photo as the "director" is a registered nurse now working under the Department of Health's regional office.

Robredo was the target of a similar misleading claim following the typhoon, which AFP debunked here.