An online report shared thousands of times on Facebook claims Philippine President Rodrigo Duterte has approved a bonus of almost US$1,000 for workers who pay into the nation’s social security system. The claim is false; the government said the claim is “fake news”; the video included in the misleading posts is an old news report that does not mention any new bonus for workers.

The online report was published here. It includes a video that it claims contains instructions about how to apply for the “bonus”. 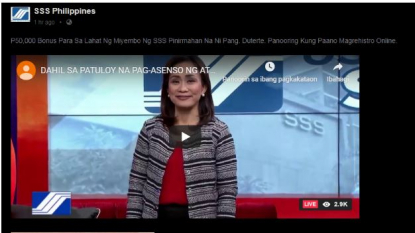 The Tagalog language headline translates to English as: “P50,000 bonus for all the members of SSS Already Signed by President Duterte. Watch How You Can Register Online".

“P50,000” refers to the amount of the payment in Philippine currency, the peso. Fifty thousand pesos is the equivalent of about $960.

“SSS” is shorthand for the nation’s Social Security System. Workers pay a portion of their wages into the system and can get services like a pension or loans.

The same video was also published in online reports here, here and here alongside a similar claim.

The reports were also shared in Facebook posts, including here and here with a similar claim.

The claim is false. The Philippines’ Social Security System posted this statement on September 7 saying the claim was “fake news”.

The Tagalog language post translates to English as:  “THIS IS ANOTHER FAKE NEWS. We would like to inform the public that IT IS NOT TRUE that President Rdorigo Duterte signed a law saying that the agency will give a P50,000 bonus to all its members.

"Be careful and don't be fooled!”

AFP used video verification tool InVid to do a reverse image search on Google of the image that appears in the false reports.

The search led to the YouTube channel of the Philippine government TV station, People's Television Network or PTV. A further keyword search revealed the image was taken from this video published on January 9, 2019 on PTV’s channel. 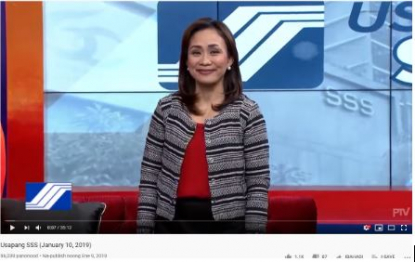 The 35-minute 12-second clip is one of a series broadcast by PTV on social security matters.

The video did not include anything about a 50,000 peso bonus payment or how to sign up for it.