A security officer checks the temperature of tenants of an office building in Manila on February 3, 2020. The Philippines on February 2 reported the first death from the new coronavirus outside mainland China. (AFP / Ted Aljibe)

A video has been viewed more than one million times in multiple posts on Facebook, YouTube and Twitter alongside a claim that the sap of tinospora crispa plants can serve as an “antibiotic” against the novel coronavirus when used as an eye drop. The claim is misleading; Philippine health experts told AFP that the plant sap could not be used to treat viruses, including the novel coronavirus, and warned against inserting it into the eyes; the World Health Organisation also warns that antibiotics cannot be used to treat viruses. 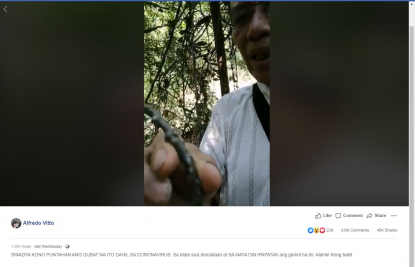 The man seen in the clip can be heard speaking Tagalog. From the one-minute five-second mark, he can be heard saying: “The coronavirus does not have an antibiotic yet. Even if I’m not a scientist, I have a right to do research. I have a right to contribute what I know. And I found out that the coronavirus is from the skin and crawls to the eyes, infecting humans who quickly die.”

“Makabuhay is the number one antibiotic. Very great antibiotic. It is bitter but not poisonous. It’s more effective if its sap is dropped directly on both eyes.”

Makabuhay is the local name of tinospora crispa, a popular medicinal plant in Southeast Asia, sometimes used to treat a variety of health conditions, according to this medical journal.

The misleading video’s Tagalog-language caption translates to English as: "I WENT TO THIS FOREST ON PURPOSE BECAUSE OF CORONAVIRUS. It passes through the Eyes and this cure IS ALSO DROPPED ON THE EYES. Find out why".

The novel coronavirus epidemic, now declared a global health emergency by the World health Organization (WHO), first emerged in the Chinese city of Wuhan in December 2019. At least 490 people have died and some 24,000 have been infected in China since the outbreak, according to this AFP report dated February 5, 2020.

The virus has spread to at least 20 other countries, including the Philippines, which reported the first death from the virus outside China.

The claim is misleading; Philippine health experts told AFP there is no evidence the sap of tinospora crispa is effective in treating or preventing novel coronavirus infections.

He said: “The novel coronavirus is a virus so an antibiotic would have no effect.”

Dr. Jaime Purificacion from the University of the Philippines’ Institute of Herbal Medicine told AFP by phone on February 3, 2020 there was no scientific basis in claims that tinospora crispa was effective in treating novel coronavirus.

“Our indication for [medical benefits of] makabuhay is [only] for scabies,” he said.

He also strongly advised the public against putting plant sap in the eyes.

“The eyes are a sensitive organ of the body. It’s dangerous because there are no safety studies,” he added.

This WHO information sheet also says antibiotics are ineffective in treating the new coronavirus strain.

It states: "No, antibiotics do not work against viruses, only bacteria. The new coronavirus (2019-nCoV) is a virus and, therefore, antibiotics should not be used as a means of prevention or treatment."