Skip to main content
A man leaves the Wuhan Medical Treatment Centre, where a man who died from a respiratory illness was confined, in the city of Wuhan, Hubei province, on January 12, 2020. (AFP / Noel Celis)

Multiple misleading Facebook posts shared thousands of times in the Philippines claim the novel coronavirus strain is “a type of rabies”. The Philippine Health Secretary refuted the claim as “close to ridiculous”; experts say the viruses are innately different.

The post, which includes a graphic discouraging people from eating bats, has been shared more than 2,000 times. 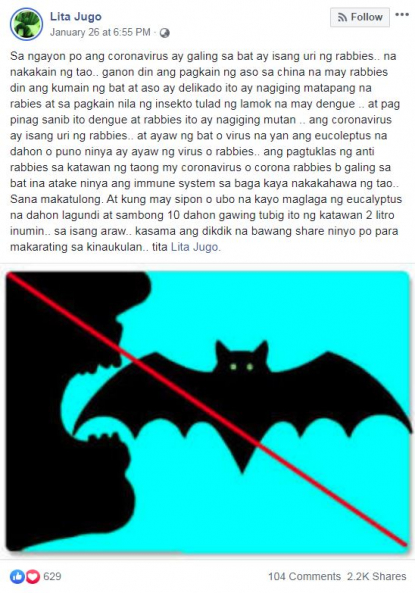 A portion of the Tagalog-language post translates to English as: "Right now the coronavirus is from bats is a type of rabies.. which has been eaten by humans.. same with eating dogs in China which also has rabies eating bats and dogs is dangerous because it becomes strong rabies and they eat insects like mosquitoes with dengue .. and this merging of dengue and rabies causes it to mutate .. the coronavirus is a type of rabies..”

Dengue refers to the dengue virus and the primary cause of dengue fever, a deadly mosquito-borne disease, prevalent in warm, tropical climates.

--What is the novel coronavirus?--

A new strain of coronavirus, believed to have originated from a market in the central Chinese city of Wuhan, has killed more than 170 people in China since late 2019, as reported here by AFP on January 30, 2020.

The virus has spread to more than a dozen countries worldwide. As of January 30, there was one confirmed case in the Philippines and at least 23 people were being monitored for the virus, CNN Philippines reported.

Rabies is a viral disease responsible for the death of tens of thousands of people each year, with “99% [of these cases] acquired from the bite of an infected dog”, according to this factsheet on the World Health Organisation (WHO) website.

It further states: “Rabies is a viral zoonotic disease that causes progressive and fatal inflammation of the brain and spinal cord.”

“Rabies is an infectious viral disease that is almost always fatal following the onset of clinical symptoms. In up to 99% of cases, domestic dogs are responsible for rabies virus transmission to humans. Yet, rabies can affect both domestic and wild animals. It is spread to people through bites or scratches, usually via saliva.”

During a press conference on January 28, 2020, a video of which has been published here on the Facebook page of Philippine news channel CNN Philippines, Duque can be heard replying to an AFP reporter’s question at the 45-minute 33-second mark: “It is actually close to ridiculous to think that [coronavirus] is now falling within the family of… rabies.”

The World Health Organisation (WHO) has issued factsheets which show the diseases have differing characteristics.

The documents state coronaviruses and rabies can cause “viral zoonotic diseases”, meaning they are transmitted between animals and people, but affect different systems in the body. A coronavirus infection usually shows respiratory symptoms whereas rabies infections affect the central nervous system.

The new coronavirus strain identified in China and rapidly-spreading worldwide has been temporarily named “2019-nCoV”.

According to the US Centers for Disease Control and Prevention (CDC), there is currently no vaccine to prevent 2019-nCoV infection.

The CDC has issued a list of preventative actions here that can help reduce the risk of infection, which include washing hands frequently, avoiding contact with sick people and contacting a healthcare provider should any symptoms arise.