Multiple Facebook posts have shared a purported news graphic from a Philippine broadcaster alongside a claim that a senator warned people against voting for President Rodrigo Duterte’s allies in the 2022 elections. This claim is false: the original broadcaster’s news graphic has been doctored to include a fabricated quote from the senator.

“Don’t vote for Duterte allies in the upcoming elections if you don’t want to drown in debt!” reads the Tagalog-language text beside a photo of boxer-turned-politician Manny Pacquaio.

A logo for Philippine broadcaster ABS-CBN appears at the bottom of the image alongside text that reads: “Senate Committee Hearing on ABS-CBN’s franchise compliance / February 24, 2020”.

The post’s caption reads in part: “[Manny] has a point. Filipinos will receive two knockout punches because of [Duterte’s] large debt to China”. 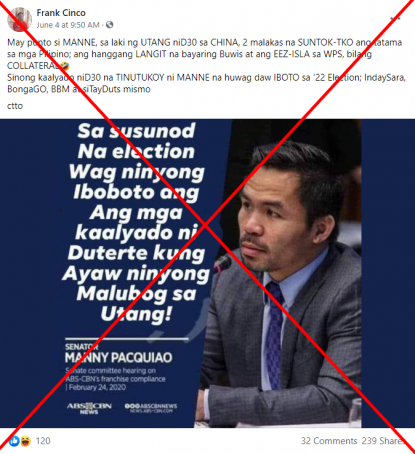 The purported news graphic has been circulating on Facebook as early as December 2020.

It resurfaced in June 2021 after reports that Senator Pacquiao argued with members of his political party over his role in the group.

Pacquiao and President Duterte belong to the same political party.

The purported news graphic was also shared in similar posts here, here and here on Facebook.

The graphic, however, has been digitally altered.

Keyword searches show that ABS-CBN uploaded the original news graphic on Twitter on February 24, 2020. It was published more than one year before news of fighting between Pacquiao and his party colleagues was reported.

The graphic’s Tagalog-language caption translates to English as: “This is what Senator Manny Pacquaio says about the possibility of losing ABS-CBN in the event its [legislative] franchise is not renewed. #ABSCBNfranchise”.

Pacquiao’s actual quote reads in English as: “It will be a big loss to the entire Filipino nation if ABS-CBN [goes off the air] because they are a big help to the country in disseminating information”.

Pacquiao gave the comments during a six-hour Senate hearing on February 24, 2020 about ABS-CBN’s then-expiring legislative franchise. The senator can be heard making the quoted statement at the video’s 1:48:33 mark.

Nowhere during the hearing did Pacquiao urge the public to reject Duterte’s allies in the 2022 polls.

Below is a screenshot comparison of the doctored news graphic (L) and the original posted by ABS-CBN (R): 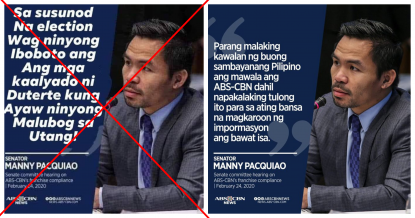 Arlene Burgos, head of engagement and partnerships at ABS-CBN News Digital, told AFP that the doctored news graphic was not produced by the broadcaster.

“[I’m] confirming that this news graphic WAS NOT produced by ABS-CBN News,” she said.