A Facebook post shared more than 20,000 times claims House Speaker Nancy Pelosi said she does not care about American coal miners and steelworkers. This is false; there is no record of the top Democrat having spoken those words, and her office said she made no such remarks. 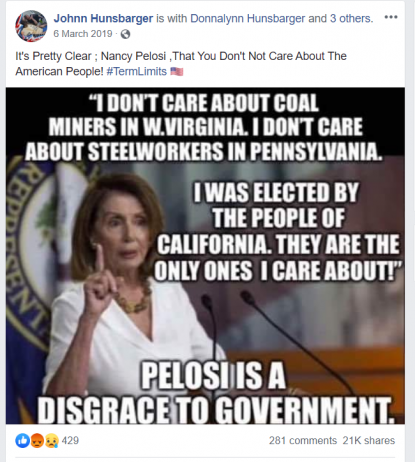 Asked if Pelosi had made the remarks, Drew Hammill, her deputy chief of staff, told AFP in an email: “No.”

Pennsylvania, home to some of America’s biggest steel manufacturers and producers of other metals, is a key battleground in this year’s presidential election. It moved into the Republican column four years ago, when Trump narrowly won the swing state by 0.7 per cent.

United Steelworkers (USW), a major union, issued a statement of support for Pelosi when she successfully ran for House speaker in November 2018.