The original photo from Philippine lawmaker Sarah Elago has been doctored

A photo has been shared hundreds of times in multiple Facebook posts that claim it shows a mugshot of a Philippine lawmaker who was arrested for recruiting students as communist rebels. The claim is false; the photo has been digitally manipulated. The original photo shows the politician, Representative Sarah Jane Elago, holding a placard with a message of support for people arrested for allegedly violating COVID-19 quarantine restrictions.

The photo has been shared more than 700 times since it was published on Facebook here on June 1, 2020. 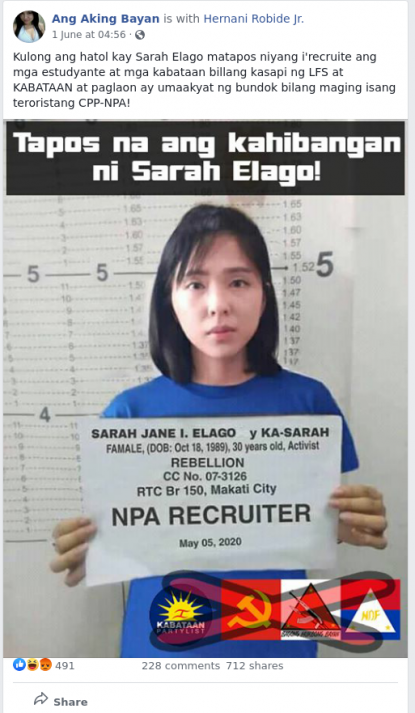 A screenshot of the misleading post taken on June 8, 2020

The post’s caption reads: "Imprisonment was the verdict against Sarah Elago after she recruited students and youth as members of LFS and KABATAAN and eventually went to the mountains to be a member of the terrorist CPP-NPA!"

Elago is the representative for Kabataan Partylist, a political party for the Filipino youth.

“LFS” is an acronym for League of Filipino Students, a student organisation and one of the founding members of Kabataan Partylist; “CPP-NPA” refers to the Communist Party of the Philippines (CPP) and its armed wing, the New People's Army (NPA).

The same photo was also shared alongside similar claims on Facebook here, here and here.

A combined reverse image and keyword search on Google found that the image in the misleading posts was edited from the original photo Elago posted on Twitter here on May 3, 2020. 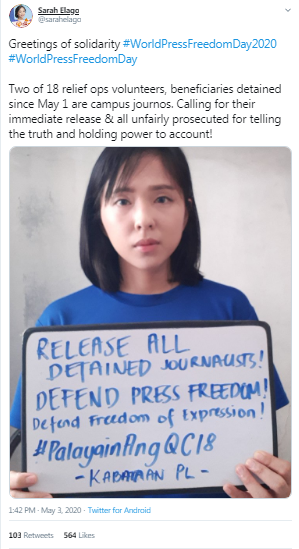 “QC18” refers to the arrest of 18 people in early May 2020 for allegedly flouting COVID-19 quarantine rules in Quezon City, northeast of the capital Manila.

Below is a screenshot comparison showing the doctored photo in the misleading posts (L) and the photo posted by Elago (R): 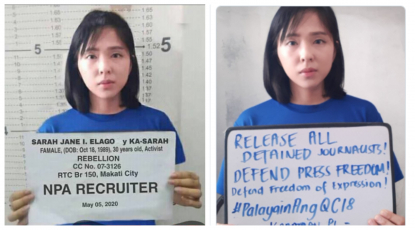 Elago, an avid Twitter user, also did not write about her "arrest" or any potential charges against her on the platform from when the misleading claim started circulating online until the time of publication.

Furthermore, the fake placard lists a criminal case number (07-3126) and a court branch number (150) that are identical to an old rebellion case against a former Philippine senator.

This court document, published by the local media organisation Phistar.com, states the case was dismissed on September 7, 2011.

Below is a screenshot of a portion of the court document, with the corresponding details circled in red by AFP: 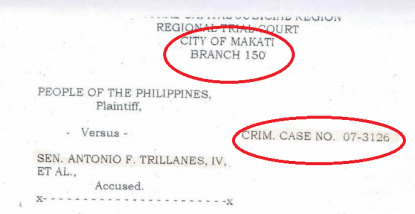