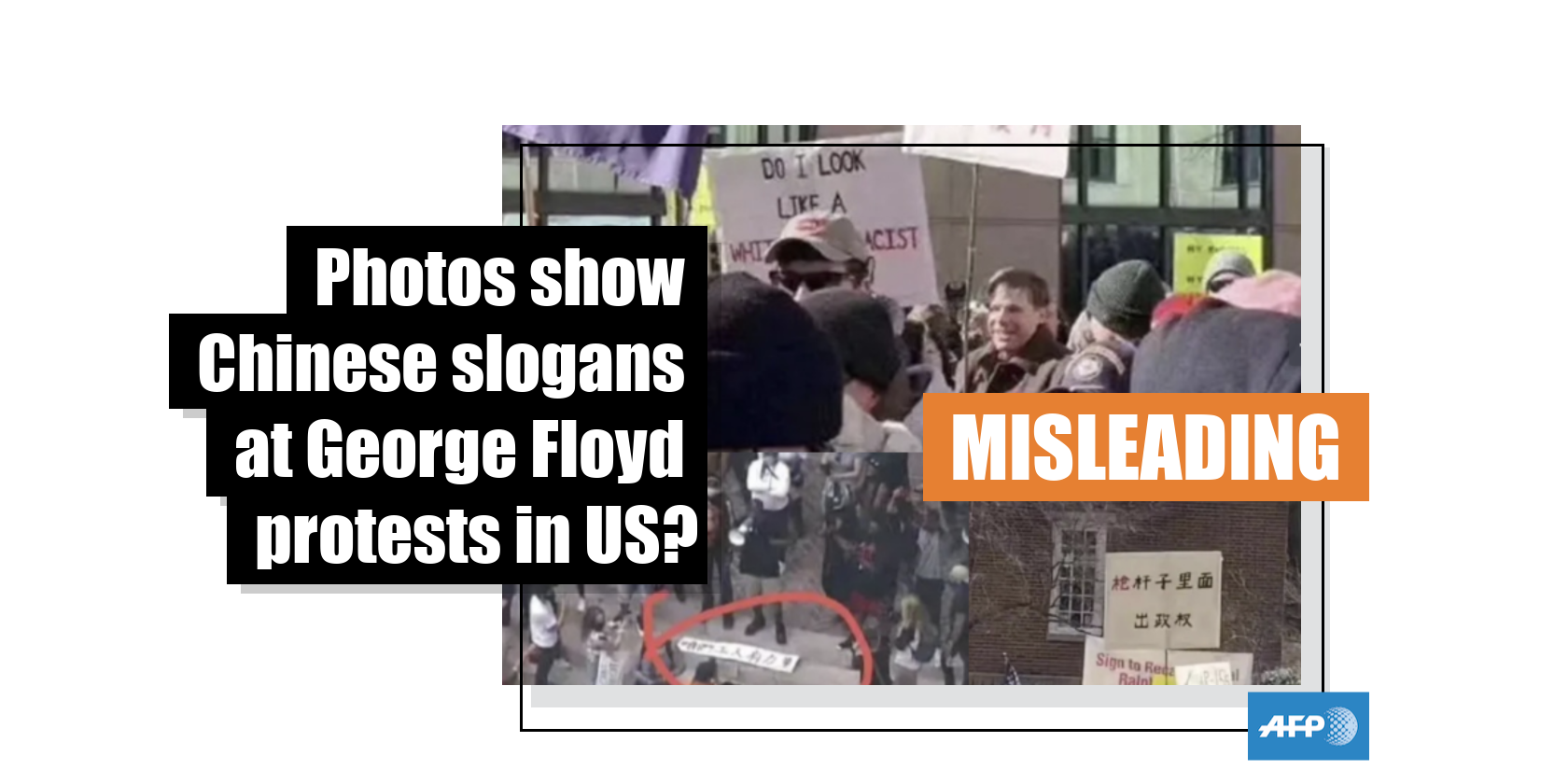 Three photos showing posters bearing Chinese slogans have been shared by Weibo users with tens of thousands of followers alongside claims that they were photographed during the nationwide protests against police brutality in the US in May and June 2020. The claim is misleading; just one of the photos was taken during such a demonstration, and the other two appeared in reports about a gun rights rally in the US state of Virginia in January 2020.

The three photos were published in this Weibo post on June 2.

Translated to English, the simplified Chinese-language caption reads: “#ICan’tBreathe / During the recent US riots, many protesters brandished wisdom from China, such as ‘political regimes are born out of the gun barrel’, ‘power to the workers’, and ‘water can carry a boat; it can sink a boat’. This reflects different ideologies slowly taking roots in the US, while so-called ‘neo-liberalism’ has gradually failed.”

The first slogan, “political regimes are born out of the gun barrel", is one stated by Mao Zedong in 1927, during the early period of the Chinese Communist Party; the second, “power to the workers”, is the name of a 1947 song that supports socialism.

The third slogan reads "the water that bears the boat is the same that swallows it up", and is a Chinese idiom that dates back to the Tang dynasty.

The photos were also shared with a similar claim here on Weibo, by user with more than 260,000 followers. Some of the images were shared separately here, here, here and here on the Chinese microblogging site, alongside claims that they were taken during the ongoing unrest in the US.

The posts circulated on Weibo in late May and early June 2020, when Americans across the country marched against police brutality and systemic racism following the police killing of George Floyd, an unarmed black man, in Minneapolis on May 25. Here is an AFP report on the protests.

However, the claim is misleading; only one of the three photos was taken during the current unrest in the US.

A combination of reverse image and keyword searches found that the first and third photos were shot months before the George Floyd protests. The two photos were published here and here in January 2020 on WeChat and forums alongside descriptions claiming that they show a gun rally in Virginia.

Below are screenshot comparisons between photos one and three in the misleading posts (L) and the photos that circulated on WeChat (R), labelled (1) and (3) by AFP: 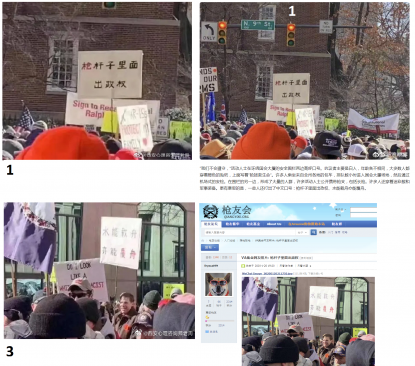 Thousands rallied for gun rights near the Virginia state Capitol on January 20, 2020, according to this AFP report.

The second photo, however, was taken during the ongoing US protests. The sign bearing the Chinese slogan can be seen at the one-hour 20-minute 16-second mark of this YouTube video from 9NEWS, a US broadcaster based in Denver, Colorado.

The video, streamed live on YouTube on May 28, 2020, is titled: “Protesters march to protest death of George Floyd for the second day”.

The demonstration took place in Denver’s Civic Center Park, which can be seen on Google Maps here.

Below is a screenshot comparison between the second photo in the misleading posts (L) and the 9NEWS video (R):