A video of Pakistan's Prime Minister Imran Khan has been viewed more than four million times on Facebook alongside a claim that it shows him condemning protests against a Pakistan extremist party leader's arrest in April 2021. The claim is false: the video shows Khan giving a speech in October 2018. In the speech, he condemned a different protest by supporters of the same extremist party.

The six-minute 49-second video was shared in this Facebook post on April 13, 2021. It has been viewed more than four million times.

The video's title shows photos of Prime Minister Imran Khan and the leader of the Tehreek-e-Labbaik Pakistan party, Saad Rizvi.

The superimposed Urdu-language text translates as: “Riots in the country after the arrest of Saad Rizvi.”

The post's Urdu-language caption translates to English as: “Riots break out after the arrest [Saad Rizvi]. Khan’s befitting address. Khan in extreme anger. Last decision. You are anti-country.” 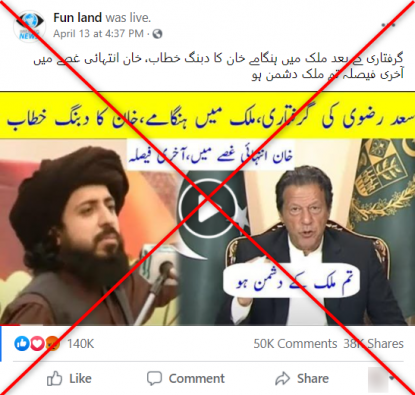 The video was published one day after violence broke out in several Pakistani cities following Rizvi's arrest.

Rizvi is the son of a firebrand cleric and previous head of the TLP, Khadim Hussain Rizvi, who died in November after leading massive anti-France protests across Pakistan. AFP reported on the protests here.

The TLP has led calls for the expulsion of the French ambassador, after the government of President Emmanuel Macron expressed support for a magazine's right to republish cartoons depicting Prophet Mohammed -- an act deemed blasphemous by many Muslims.

The same video was published here, here and here on Facebook alongside a similar claim.

A keyword search of Khan’s speeches on Google found the video actually shows a speech he gave in 2018.

In the video, Khan asks: “How can a government operate, when someone rises up and says murder the judges and rebel against the army chief, brings people on the roads and block the roads? Which government, which country can run if such things are happening?”

He continues: “They are closing roads and people are being deprived of their livelihoods… This is not any service to Islam, this is enmity with the country.”

In the clip, he criticises the TLP for calling for killing of judges and rebellion against the army leadership over the acquittal of a Christian woman, Asia Bibi, who faced the death penalty over blasphemy charges. After eight years on death row, Bibi was dramatically acquitted in 2018 and subsequently fled to Canada, AFP reported.

The 2018 video of Khan’s address was posted here on YouTube by the Pakistan government on October 31, 2018.

The misleading video corresponds to the official video from the 10-second mark to the seven-minute two-second mark.

In reality, the tone of Khan's speech about protests by TLP supporters in April 2021 was more moderate than the misleading posts suggested.

In the clip, he appealed for calm, describing the violent protests as "regrettable".

At the video's four-minute 37-second mark, he says: "Last week, these unfortunate events, one party thought that maybe they love their Prophet more than other Pakistanis.

"Look, the aim of the TLP -- which is the reason they're putting people on the streets -- I assure you that is also my aim, my government's aim.

"We -- just like them -- don't want our Prophet to be insulted anywhere in the world. It's just our methods are different."

The speech was covered by Pakistani newspaper Dawn in a report published here on April 19, 2021.