A video showing military trucks driving down streets in Hong Kong has been viewed tens of thousands of times in social media posts that claim Chinese soldiers are taking control of the city. Some of the misleading posts share a purported public announcement from Hong Kong authorities dated July 24, 2019 urging residents to stay home “for your own safety” while a military takeover is underway. The claims are false; the video has circulated online since November 2018; the Hong Kong government has released no such announcement.

The 39-second clip, which shows Chinese People's Liberation Army (PLA) military trucks driving down a Hong Kong street, was published here on Facebook on July 24, 2019, where it has been viewed 15,000 times.

The English-language caption of the post shares a purported announcement from the Hong Kong government that says in part:

“For your own safety all the HK residents are asvised (sic) not to go to public places and sea sides for next 48 hrs and avoid gatherings as PRC army is taking control of HK from now onwards. For your own safety please stay inside your homes and avoid un-necessary going out.
Secretary Office
HKSAR
24/07/2019 ...…………” 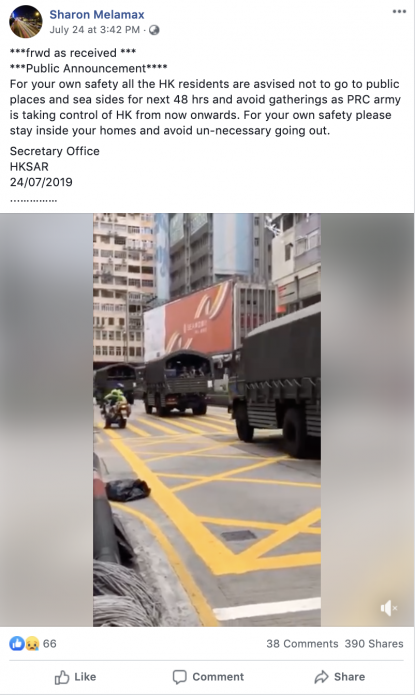 The tweet says: “Chinese military trucks roaming around the city to surveillant Hong Kong citizens who are against the extradition bill. We all need to support peace-loving democratic Hong Kong people. Okinawa and Taiwan need to be careful. They are behind you. #savehongkong”.

The same video and similar claims have also been posted on YouTube, for example here, here, and here.

All claims are false; the video has circulated online since at least 2018; the Hong Kong government did not issue a public announcement on July 24, 2019 about a military take over of the city.

The video caption says: "Super sensitive! In Jordan, Hong Kong PLA troops passing by. Hong Kong police are clearing the way for them!"

Below is a screenshot comparison of the viral video clip (top) and the YouTube footage (bottom) published in 2018: 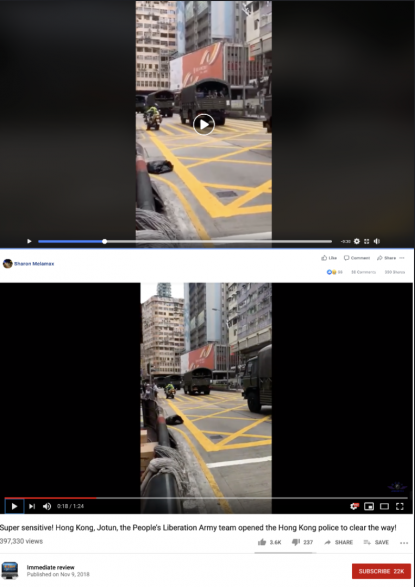 A search of the Hong Kong government’s official website here found no press statements had been issued on July 24, 2019 concerning a public announcement about a military take over.

The misleading post appeared online the same day that China said on July 24, 2019 that its army could be deployed in Hong Kong if city authorities requested support in maintaining "public order". Here is an AFP report on the issue.

No, this video does not show two Russian submarines received by the Philippines