Skip to main content
A policeman throws a stone towards supporters of Tehreek-e-Labbaik Pakistan (TLP) during a protest in Lahore on April 12, 2021, after the arrest of their leader, who has called for the expulsion of the French ambassador. (Photo by Arif ALI / AFP)

A photo of a burning motorcycle rickshaw has been shared in multiple Facebook posts which claim it was set ablaze during protests in Pakistan in 2021. The claim is false: the photo has circulated online since at least 2018 in reports about a different protest.

The post's Urdu-language caption translates as: “Some true lover of the Prophet (Mohammed) obtained a ticket to heaven by burning a poor man’s blasphemer rickshaw.” 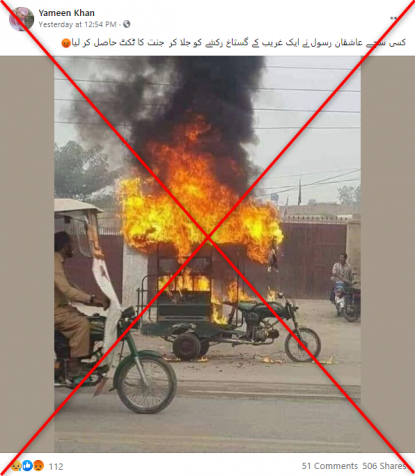 The post circulated a day after protesters spilled into the streets of Pakistan in anger over the arrest of Islamist party leader Saad Rizvi on April 12, 2021. AFP reported about the protests here.

Rizvi was taken into custody after calling for the expulsion of the French ambassador, over France's support for a magazine's right to republish cartoons of the Prophet Mohammed -- an act deemed blasphemous by many Muslims.

The same photo of a burning rickshaw alongside a similar claim that it was taken in April 2021 was also shared here, here and here on Facebook.

Reverse image searches on Google and TinEye show that the photo has circulated online since November 2018.

The photo was shared here on November 1, 2018 in a Facebook post that relates to a different protest in Pakistan.

Below is a screenshot comparison of the photo in the misleading posts (L) and the 2018 Facebook post (R) with the publication dates circled: 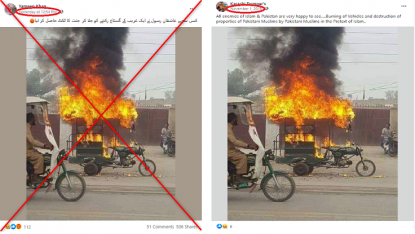 The photo was also shared on Twitter here on November 1, 2018.

The photo was also featured in an online report by Pakistani television channel ARY News on November 6, 2018.

The ARY News report reads in part: "Chief Justice of Pakistan (CJP) Mian Saqib Nisar on Tuesday took notice of the damage caused to public and private properties during the three-day countrywide protests by religious parties over the acquittal of Aasia Bibi in a blasphemy case."

"The three-day countrywide protests over the acquittal of Aasia Bibi ended last week when the federal government reached an agreement with the protesters."