Skip to main content
A commuter wearing a facemask as a preventive measure against the spread of the COVID-19 coronavirus, travels in a train in Colombo on July 16, 2020. (AFP / Ishara S. Kodikara)

Two images of a dirty toilet have been shared thousands of times in multiple posts on Facebook alongside a claim they show a toilet on a Sri Lankan train in July 2020. The images, however, have been shared in a misleading context; the Facebook user who first uploaded the photos said he took them in 2018; Sri Lankan railway officials said its train toilets have since been updated.

It shows a screenshot of a Facebook post that features two photos of a dirty toilet, geotagged to Kandy railway station. The dateline reads “yesterday”. The post states: “A toilet room on the Intercity express of Sri Lankan railways”. 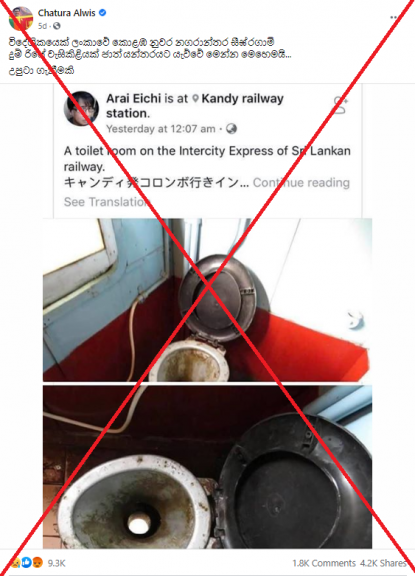 The post’s Sinhala-language caption translates to English as: “This is how a foreigner promoted the Colombo-Kandy Intercity express train, internationally.”

The same screenshot was also shared here, here, here and here on Facebook, alongside a similar claim.

The Facebook user named in the screenshots in the misleading posts published this statement refuting the claims on July 24, 2020, saying the photos were published online and subsequently deleted “two - three years ago”. 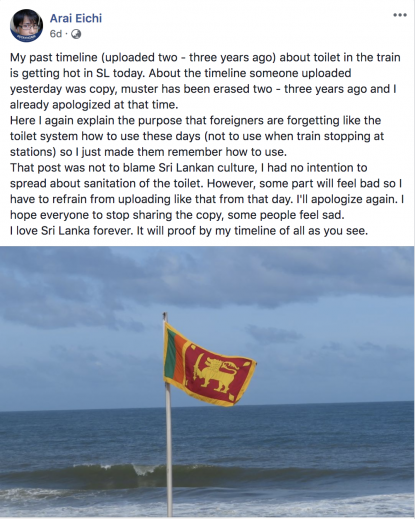 In response to the posts, M J D Fernando, the general manager of Sri Lanka Railways, told AFP the image has circulated online “a few years back” and does not reflect the current state of the toilets.

“We also checked the passengers details on the date for the train in question and confirmed no foreigners travelled in the train on the date mentioned in the social media posts circulating the misleading claim.”

In response to the misleading posts, Sri Lanka Railways’ administration officer for Galle district Wiraj Nanayakkara published this Facebook post on July 24, 2020. It states the photos are old and the train toilets have since been updated.