Multiple posts on Facebook, Twitter and Line, a messaging chat app, in January 2020 claim that Thailand has created seven new provinces. The claim is false; Thailand's Department of Provincial Administration refuted the claim and confirmed that Thailand has 76 provinces, the last of which was established in 2011.

The Thai-language message translates to English as: “This morning, Thais woke up to the news that our country has 83 provinces. Do you know that there are now 7 new provinces? There are also 7 administrators and other positions appointed to each department.”

Below is a partial screenshot of the message: 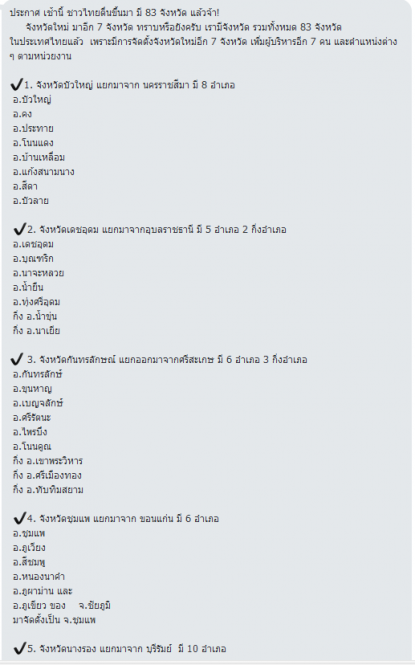 The claim is false; the Thai government publicly refuted the claim and said that Thailand has 76 provinces.

“Regarding the online news sources which appeared to announce Thailand currently has 83 provinces, the Department of Provincial Administration, Ministry of Interior would like to clarify that this information is false," the departent said in a statement on January 8, 2020. "This message has been shared since 2015, and we would like to inform that Thailand is composed of 76 provinces in total.”

Below is a screenshot of the official statement: 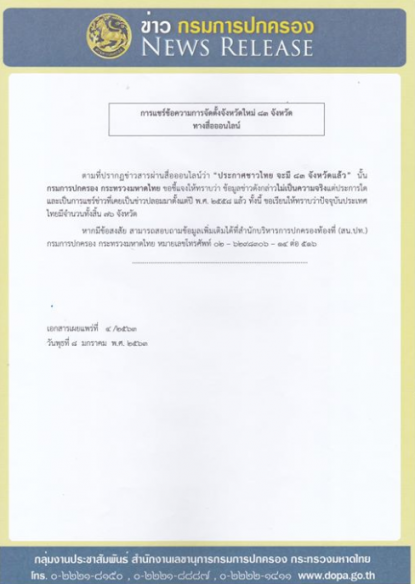 Screenshot of the official statement

Examples of the false claim circulating on Facebook in recent years can be seen here and here.

The Department of Provincial Administration also confirmed to AFP that the most recent province established in Thailand was Bueng Kan in 2011.

Bueng Kan is located in the northeastern region of Thailand.